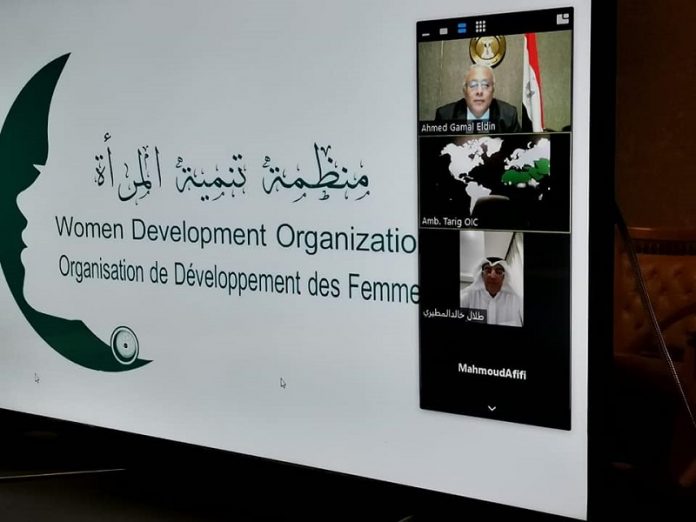 Cairo (UNA-OIC) – The first regular session of the Women Development Organization, a subsidiary organ of the Organization of Islamic Cooperation (OIC), began in Cairo on Wednesday with a virtual meeting of senior officials of the OIC member states.

In his opening speech, Jamal El-Din welcomed the representatives of the 15-member states of the Women Development Organization. He emphasized that the development equation is not complete without activating the role of women and providing them with the skills, abilities, and the necessary opportunities and support for them to play their role in the development of their societies in parallel with their efficient role in developing and supporting their families.

The Egyptian official also expressed appreciation for the sacrifices and efforts made by women in Islamic societies. He added that, in recognition of these facts, the OIC Council of Foreign Ministers (CFM) decided in 2010 to institutionalize the efforts of the pan-Islamic body, in order to achieve gender equality and the empowerment of women by adopting the Statute of the Women Development Organization. The Statute of the Cairo-based Organization entered into force on the 30 July 2020, allowing it to start its functions.

This was followed by a speech by the Director of the Women’s Department at Burkina Faso’s Ministry of Women, National Solidarity, and Family — in his country’s capacity as Chair of the 7th Session of the Conference of Ministers in Charge of Women in OIC Member States — in which he praised the great effort made by the Egyptian government and the OIC General Secretariat for the Women Development Organization to start its activities.

On his part, Assistant OIC Secretary-General Ambassador Tariq Ali Bakhit reviewed the efforts made by the General Secretariat in cooperation with the Egyptian government over recent years to bring the Women Development Organization into force, and the convening of two meetings of the Open-ended Working Group to agree on the Organization’s procedural rules. He also commended the constructive efforts being exerted by the Egyptian government in order for the Organization to start its functions.

The meeting discussed several important issues and documents that will help launch the work of the Organization. These documents will be submitted Thursday to the OIC ministers in charge of women.

A large number of OIC countries have also signed the Organization’s Statute, and internal procedures are currently being finalized for its approval in accordance with the legal system of each country.