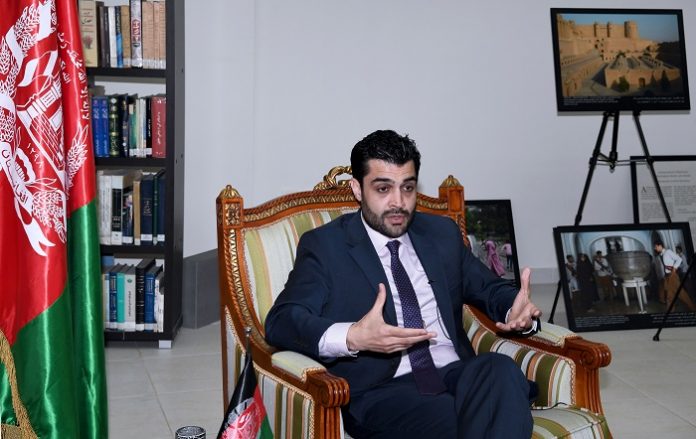 Abu Dhabi (UNA-OIC) – Afghanistan has sought the UAE’s support for digitalization of its logistics infrastructure, which will help the country facilitate regional trade to achieve economic growth and become a bridge between South and Central Asia, and Arabian Gulf, said a top Afghan diplomat.

In an interview with Emirates News Agency (WAM), Afghan Ambassador to the UAE Javid Ahmad said, “We have a planned large-scale program on digitalization with the UAE, which would involve digitalization of our trade and logistics infrastructure.”

Afghanistan is in talks with a UAE firm to look into the schematics of the country’s dry ports and customs ports to see how they could mainstream the customs revenue collection, he said without revealing the UAE firm’s name as the talks are not concluded as of now.
Enhancing regional connectivity

“That’s very important for us because an estimated 46 percent of our government revenues come from customs but the current system allows some loopholes for leakages, waste and misallocations,” Ahmad said, pointing out that the digitalized logistics infrastructure will enhance Afghanistan’s regional connectivity.

“We believe that if we want Afghanistan to be the land bridge between South and Central Asia, regional connectivity is important, especially as part of our own plan for economic growth,” the envoy affirmed.

Afghanistan wants to extend its connectivity beyond South and Central Asia towards Arabian Gulf, particularly the UAE, through Port Qasim in Karachi, Pakistan and Chabahar Port in south-eastern Iran, he explained.
Digitalization of communication infrastructure

“We need to get logistics revamped and we are engaged with the UAE firm to see whether they could come and study to completely reform and restructure it, which would also include technology transfer,” Ahmad revealed.

In another aspect of cooperation in digitalization, he added, “We realize the future is digital and we are working to create a unified communication infrastructure network across the board, especially for our key government institutions. That includes important technological support, for example, on data integration systems. We are engaging with the UAE on this and it is a flagship project.”
Agriculture, aviation on top of economic agenda

The ambassador also revealed that efforts are on to establish a joint UAE-Afghanistan Business Council, saying on the bilateral economic agenda, agriculture and aviation sectors are a top priority.

Aviation sector is important “especially because the UAE’s three-company consortium is already managing four of our international airports. So now we’re looking to see how in the aviation sector UAE’s engagement could deepen to include, for example, building a passenger terminal, building a cargo terminal, as well as establishing a logistical and food processing zone,” the envoy explained.
Students build cultural bridge

About 5,052 Afghan students, mostly children of long-term expatriates living here and others who came here on UAE-funded scholarships, are getting educated across all seven emirates, he noted.

“Most of these students in the UAE go back to Afghanistan and provide a meaningful contribution to the country’s development and reconstruction efforts,” Ahmad said.

“This is part of our bilateral educational agenda and we are grateful to the UAE for providing them with that opportunity for our students in UAE schools and universities.”

These students, from preliminary level to masters and a handful of PhD candidates (56 of them are on UAE government scholarships), are in a better position to build cultural bridges between the two countries as they are studying at the UAE government institutions along with Emiratis and other Arab expatriates, the envoy explained.
Security partnership

It is known that many other expatriate communities in the UAE, especially Asians, have larger number of students but most of them study in their own community schools.

The Afghan students’ numbers will likely increase “as we engage more with our UAE partners in new areas, including in technical sectors such as Artificial Intelligence (AI), IT, finance, accounting and hospitality management,” the envoy noted.

As the bilateral security partnership deepens, more Afghan students will come and study at the UAE’s diplomatic and security academies and they could be better prepared to face modern-day challenges, he said.
Over 120,000-strong community

The businessmen among them are mainly engaged in construction, real estate, aviation and food and agriculture sectors, the ambassador said.