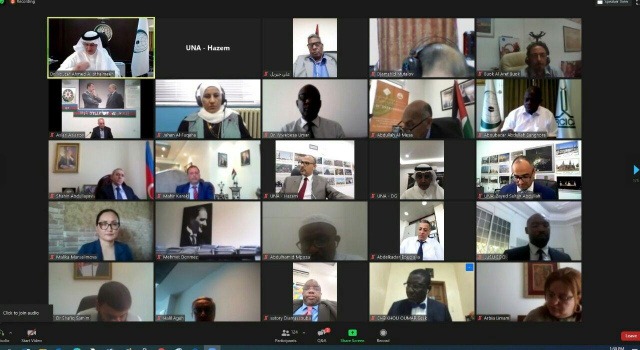 Secretary General of the Organization of Islamic Cooperation (OIC) Dr. Yousef bin Ahmed Al-Othaimeen has delivered a lecture on the overall achievements and efforts made by the OIC General Secretariat and its organs in serving Islamic issues and in the framework of OIC’s work to battle the novel coronavirus (COVID-19), the Union of OIC News Agencies reports.

This came during the virtual Media Forum of the Union of OIC News Agencies (UNA) on the efforts of the Organization and all its organs in serving Islamic causes and confronting the impacts of the COVID-19 pandemic, on July 14.

Al-Othaimeen expressed sincere gratitude and appreciation to the Government of Saudi Arabia, led by Custodian of the Two Holy Mosques King Salman bin Abdulaziz Al Saud, President of the Islamic Summit, and to Crown Prince Mohammed bin Salman, for the continuous support received by the OIC from the Kingdom – the headquarters country.

The Secretary General noted that this support has a great impact on facilitating OIC’s work and enabling it to carry out the tasks assigned to it, especially in these exceptional circumstances that the Islamic world is experiencing due to the outbreak of the coronavirus pandemic. He added that Saudi Arabia’s Presidency of the Islamic Summit has given further impetus to joint Islamic action, thanks to the Kingdom’s regional and international weight, as well as its spiritual centrality in the Islamic world as the home of the Two Holy Mosques.

Al-Othaimeen pointed out that the considerable support of Member States and their concerted efforts and solidarity have contributed greatly to elevating the status of the Organization and enhancing its role.

The Secretary General stated that the OIC rushed to hold a virtual Extraordinary Meeting of its Executive Committee at the level of Foreign Ministers on the Consequences of the Novel Coronavirus Pandemic and Joint Response in April 2020. He said the meeting was held in coordination with the Kingdom of Saudi Arabia in its capacity as Chair of the Islamic Summit and the OIC Executive Committee.

With regard to the follow-up on the COVID-19 crisis on the Palestinian issue, he stressed that the OIC accorded special attention to supporting the Palestinian people in fighting the pandemic, in coordination with the various relevant OIC organs, such as the Islamic Solidarity Fund and the Islamic Development Bank (IsDB), which announced a $35.7 million aid package for the State of Palestine.

Al-Othaimeen noted that the General Secretariat held a virtual meeting of the OIC Steering Committee on Health (SCH), in coordination with the Government of the United Arab Emirates, in addition to the Jurisprudence Medical Symposium, held by the International Islamic Fiqh Academy (IIFA) – a subsidiary organ of the OIC, to discuss the Shariah provisions related to the COVID-19 pandemic.

In the same context, the OIC chief indicated that the General Secretariat endorsed the initiative launched by the Islamic Solidarity Fund, an OIC subsidiary organ, to set up a dedicated account to assist Member States, especially the LDCs among them, in order to enhance their capabilities in facing the coronavirus pandemic.

The Secretary General appreciated the IsDB’s initiative to establish a $2.3 billion Strategic Preparedness and Response for the COVID-19 Pandemic. He also expressed appreciation of the initiatives launched by the Islamic World Educational Scientific and Cultural Organization (ICESCO), a specialized institution of the OIC, in coincidence with the spread of the pandemic, including the “Societies We Want” initiative to spread knowledge and implement innovative programs to build healthy, safe, prosperous, resilient and sustainable societies.