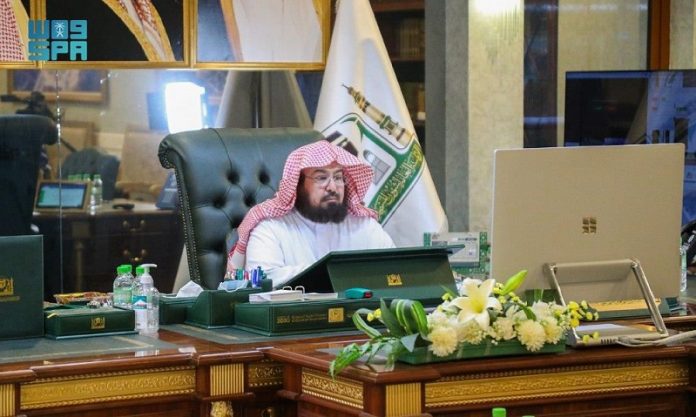 Makkah (UNA-OIC) – General President of the Affairs of the Grand Mosque and Prophet’s Mosque Sheikh Dr. Abdul Rahman Al-Sudais announced on Sunday the Presidency’s plan for the Holy Month of Ramadan 1442 H (2021).

The announcement was made at a virtual media conference held by the General Presidency in the presence of Acting Minister of Media Majid bin Abdullah Al-Qasabi.

During the event, Sudais stressed that the General Presidency and the security authorities operating inside the Two Holy Mosques will be very strict in applying the precautionary measures, and preserving the safety of visitors of the Two Holy Mosques. He pointed out that the Mataf will be used for circumambulation only.

Sheikh Sudais added that the plan was a result of hard work and dedication over the past year. He emphasized the Presidency’s keenness to intensify precautions, activate technical aspects, facilitate the performance of rituals for pilgrims and worshipers, and enrich their experience in line with the Kingdom’s Vision 2030.

For his part, al-Qasabi called on media representatives to cooperate with the General Presidency to highlight the great efforts made by the Saudi government in a way that reflects the true image of the Kingdom and its leadership in serving pilgrims and Umrah performers.