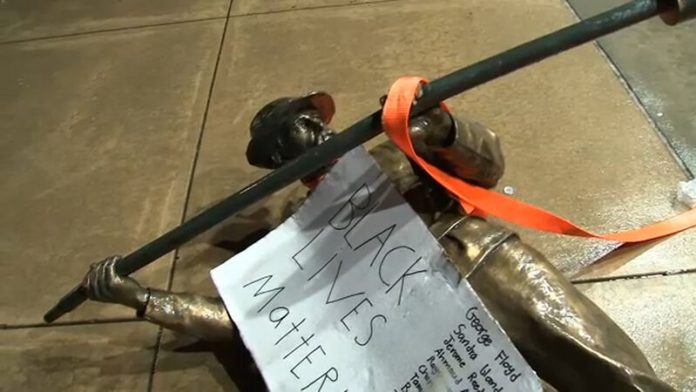 Demonstrators in America staged protest against racism, the protests were public reaction against cold-blood killing of Black people by Police.

Recently, a black American citizen, George Floyd, has been killed at the hand of the US police while he was unarmed.

To deal with anti-racism protests, Police and Army forces have come to the scene to suppress the protests.

They even fired tear gas at the demonstrators in front of the White House.

Anti-racism demonstrators in America tore down more statues including the one belonged to the writer of America’s national anthem and also personalities whose works led to ending slavery.

In San Francisco’s Golden Gate Park along the Pacific Ocean, protesters sprayed red paint and wrote “slave owner” on pedestals before using ropes to bring down the statues and drag them down grassy slopes amid cheers and applause, according to foreign media.

Officials, civil activists and analysts across the world have reacted to mass demonstrations in the United States.

Iraqi researcher Zoha al-Khaldi has recently told IRNA that the US is a country introduces itself as the biggest power in the world; meanwhile, it does not look after the lives of its citizens and orders crackdown on the freedom-seeking demands. Such measures indicate that the current US administration does not care about lives of people and shatters human dignity.

In a related development, spokesman for the Iranian Foreign Ministry Abbas Mousavi stated in first June that the world has stood by the American people and heard their voice of oppression.

“To the American people: The world has heard your outcry over the state of oppression. The world is standing with you. The American regime is pursuing violence and bullying at home and abroad.”

Also on June 4, Iranian President Hassan Rouhani talked of the death of Floyd, saying that it makes no difference whether the one killed in the US was Muslim, Christian, American or non-American, the major issue is that the US police committed a deliberate homicide, and it is a strange story that tells us that humans are still far from civilization.