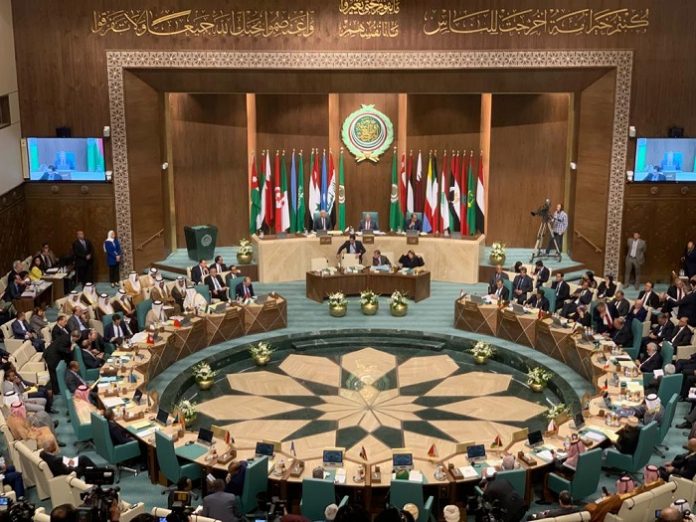 Cairo (UNA-OIC) – The Council of the League of Arab States, at the level of foreign ministers, called on the international community to put pressure on Israel in order not to obstruct the Palestinian general elections in occupied East Jerusalem and the rest of the occupied Palestinian territories.

The Council also welcomed in its resolutions issued at the end of the 155th ordinary session, which was held yesterday in Cairo, the decision of the First Pre-Trial Chamber of the International Criminal Court (ICC) that its jurisdiction extends to the territories occupied by Israel since 1967, namely Gaza and the West Bank, including East Jerusalem, and urged the ICC to promptly open a criminal investigation into war crimes and crimes against humanity committed by Israel against the defenseless Palestinian people, with a view to holding war criminals in the occupation government and army accountable and not with impunity.

The Arab foreign ministers affirmed respecting the legitimacy of the Palestine Liberation Organization (PLO), the sole legitimate representative of the Palestinian people, headed by President Mahmoud Abbas, appreciating his efforts in the field of Palestinian national reconciliation, and welcoming his issuance of the decree calling for the holding of Palestinian legislative and presidential elections and the National Council of the PLO respectively.

The Council affirmed its support for the peace plan that President Mahmoud Abbas presented at the United Nations General Assembly on Sept 25, 2020, as well as working with the International Quartet and the international actors, to establish a multilateral international mechanism to sponsor a credible peace process with a specific timeframe.

The Arab foreign ministers also backed holding an international conference to restart negotiations on the basis of international law and resolutions, the principle of land for peace and a two-state solution, leading to an end of the Israeli occupation of the Palestinian land occupied in 1967.

The Council strongly condemned the decisions of Kosovo and the Czech Republic in violation of international law to open two diplomatic missions in Jerusalem, and called on the Arab countries that establish relations with them to reassess those relations with the two countries.

The Arab League Council affirmed the intention of the member states to take all necessary practical measures at the political, diplomatic, and economic levels to confront any decision by any country that recognizes Jerusalem as the capital of Israel, or moves its embassy to the occupied city.

It affirmed the call for Arab countries to abide by the decisions of the Arab League and to activate a $100 million monthly financial safety net to support Palestine to face the financial crises it is exposed to.

The ministers called on member states to implement Amman Summit Resolution of March 29, 2017, regarding increasing the capital of the Al-Aqsa and Jerusalem Funds by an amount of $500 million.

They also condemned the Israeli settler policies and measures, and called on the UN Security Council to assume its responsibilities towards implementing its Resolution No. 2334 of 2016 and holding those who violated it accountable, confronting and stopping the building and expansion of settlements and the annexation wall, and the forced displacement of the Palestinian population and the demolition of their property.

The Council affirmed its refusal to recognize Israel as a Jewish state, condemning the systematic Israeli racist policy of enacting legislation that undermines the historical rights of the Palestinian people and discriminates against them.

It also affirmed that East Jerusalem is the capital of the State of Palestine, rejecting any attempt to diminish the right to Palestinian sovereignty over it, and strongly condemning and categorically rejecting all systematic and illegal Israeli policies and plans that aim to legitimize the annexation of the city and distort its Arab identity.

The ministers emphasized that the Palestinian refugee issue is the core of the Palestinian cause, stressing adherence to the inherent and inalienable right of the generations of Palestinian refugees and their descendants, to return to their homes from which they were displaced, in accordance with United Nations resolutions, especially General Assembly Resolution 194 (1948), and the Arab Peace Initiative.

The Council affirmed the mandate granted to the United Nations Relief and Works Agency for Palestine Refugees (UNRWA) according to its establishment resolution (General Assembly Resolution 302 of 1949) and refused to prejudice its mandate or responsibility and not to change or transfer its responsibility to another party.

The Council also rejected the systematic Israeli campaigns against UNRWA, including the endeavor to close all the Agency’s centers and schools in occupied Jerusalem and to replace them with Israeli occupation institutions.