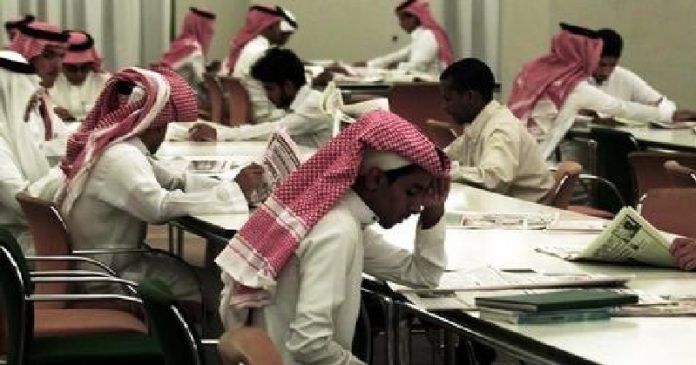 Western political dinner tables spare not a day without hollow waves of laughter about what the Arab leaders say and do underpinning obsessed human follies. For too long, the oil exporting Arab leaders ignored the new educated generation calls for critical thinking on their social, economic and political affairs. The core concern underlying the phenomenon of political change has an inextricable relationship to new thinking and reconstruction of systems of political governance away from the dormant neo-colonialism prevalent across the Arab Middle East. No Arab leaders will entertain any critical or positive thinking for a futuristic change. The people’s “want” perception embodies “fear” of the unknown that Arab authoritarianism will diminish and kingdoms of clans will no longer be feasible to ensure petrodollar Western security establishments operated governance of the few. They could displace and kill millions of the fellow citizens but not listen to voices of reason. The issue is where you draw the line between a logical discourse of political change and one track monstrous scheme of things to undo the people’s aspirations for freedom from “want” and “fear.”

The whole of the Arab region reflects the absence of moral and intellectual imagination for the future. Human development is ignored and obstructed, materialistic development is adored. Was the GCC a holistic attempt to deny the colonial geography and history and make the Arabs One Nation- “Ummah” again? Its leaders should do serious soul searching if they are on a right track of thinking and actions. The emerging clash of tribal clans victimizes the interest of the Arab masses. Ignorance and arrogance overwhelm to buy the US lobbyists interest with petrodollar and try to instigate monkey games for political favors against one another. But Arab leaders have no sense of time and history how such backdoor intrigues are managed. The latest GCC individualistic leadership skirmishes pinpoint how Arab leaders are disconnected to the reality of the contemporary geopolitical world. GCC was formulated to bring the unity of minds and actions of the Arab region.

The unthinkable judgment to accuse Qatar of “supporting terrorism” comes out of the nowhere. A good deal of foreign propaganda asserts blames for supporting the 2011 Egyptian people’s revolution and electing the leadership of Muslim Brotherhood for a change. The envisaged change could not materialize as the Muslim Brotherhood did not realize the imperatives and sensitivities of political governance, once they were in power. Egyptian Generals are explicitly involved in businesses and major industries with certain Western economic and political interests and backing. This interest lobby could not be changed by the Muslim Brotherhood and General Sissi was encouraged to oust the elected President Morsy and imprison him under a false pretext. The military coup was supported by the then Saudi King Abdullah, The US, Israel and other affluent gulf member states. Arab authoritarianism lacks imagination for peaceful change and transfer of power to elected institutions. For the GCC affiliates, it is a policy issue, not a situation of warmongering treats to entrap Qatar, Kuwait or others indifferent to foreign dictates.

The US strategy is enlarged in its scope by most recent sales of $110. Billions worth of weapons to Saudi Arabia. Weapons are not needed to the Arab Gulf Region, wisdom for logical pursuit is. Peace is not being pursued by the Arab leaders, and unity is absent in all rational thoughts for actions. If the Arab leaders cannot focus to resolve the central issue of the Middle East – the freedom of Palestine and peaceful relationships with Israel, other issues are superficial and misleading. Most Arab people and culture contribute for charities to help the less fortunate in social and economic disparities. This is the core value of the Arab-Muslim culture as is in many Western nations. If Qatari charity organizations are doing it, why it has become a belligerent issue now? There is a hidden political agenda and clash of the clans in the current hostilities. Maybe the Arab leadership of the GCC should rethink what it means to be serving the interest of the masses? If so, they will find a workable solution rather than becoming a laughing stock all over the globe.

Towards Rethinking – Palestine is the only Issue, all others are Absurd

If the Arab leaders think buying more weapons will solve the security problems of the region, they are damn wrong and disconnected to the reality. They desperately need to have a critical analysis of their current situation- their strength and weaknesses. They are operating from a position of weakness, not strength in global affairs. Otherwise, why would instigate internal disruptive behaviors and foreign strategies to engulf the culture with political cynicism, militarization and greater uncertainties for the future. Absolute authoritarian leaders have many enemies all around them. The worst and most dangerous is the animosity against their own self.

The Arabs, once a pioneer of knowledge-based advanced civilization lasting for eight centuries – the longest period in human history, are the victims of a delusional oil-pumping economic prosperity imported as a marriage of convenience forged between the tribal Arab rulers and the Western industrialized world – more so, the USA and Britain. Throughout the 20th century and well into the 21st century, the oil richness failed to deal with emerging social, moral, intellectual and political problems. Instead with the militarization of the region, increasing bloodbaths depicts a havoc political spectrum. Living without roots and reason. Islam enriched the Arabs to become global leaders of a progressive civilization, but the oil enhanced prosperity transformed them into ‘camel jockeys’ and object of hollow laughter after-dinner jokes across the Western culture. Money cannot buy wisdom, honor and human integrity. The bogus “war on terrorism” could not have happened if the Arab leaders – the frontline bogyman of the US Empire had a rational mind, intellectual capacity and integrity to challenge the most irrational and cruel act in human history. Throughout the oil exporting Arab world, the contemporary rulers have turned out to be complacent in the US –Israeli strategic plans for the future of the Middle East. Most rulers appear to be missing the essential human conscience – the hub of Islamic characteristics of human beings to see the unfolding political and economic realities on the ground. None of the leaders have ever come out to represent the public conscience on the issue of Palestine and the establishment of an independent homeland for the people of Palestine. If the Arab leaders had any knowledge, understanding and sense of responsibility of the future and of the devastating short and long-term impacts of this bogus war, they should have challenged the American policy or sought advice from Muslim intellectuals and scholars to assess the crisis situation for reasonable alternatives.

Towards Remaking a Future with Knowledge and Unity of Purpose

Are the contemporary Arab dictators the reason for the decadence of the Muslim people and culture? Surely, when common folks live in hues and cries, they fail to think positively of any vital spectrum of life. Was the petrodollar a conspiracy (“fitna”) to disconnect the Arab people with the Islamic civilization? Ironically, how the few tribal leaders could have managed the time and history on their own unless large segments of the masses were complacent in making the tragedy? The contemporary global affairs warrant intelligent and competent leadership, not kings, not military dictators or fatty and dull prince occupying splendid palaces away from the people. Leaders manage the crisis when facts of life warrant change and adaptability to the future. Often crisis unites people of reason but not the Arab rulers. Notwithstanding the requisites of reason and honesty, many Arab rulers are collaborating with the US-Israel warmongering strategy in the Arab Middle East. Unless political power is peacefully transferred to the able succeeding generations, Arab authoritarianism is a dead-ended phenomenon. There are no Arab public institutions of critical thinking and no leaders to lead. One wonders, why the earth never felt any weight of the oil pumping Arab leaders.

In view of the unstoppable cycle of political killings and daily bloodbaths in so many Arab states – Syria, Iraq, Libya, Yemen and spill-over to other oil producing Arab nations – deliberate dismantling of the socio-economic and political infrastructures – is the Arab world coming to its own end because of the sadistic authoritarian rulers? The Arab leaders and the masses live and breathe in conflicting time zones being unable to see the rationality of people-oriented systems of governance, the worst is yet to come, surrender to foreign forces as there are no leaders to think of the future or the Arab armies to defend the people. Once in history, Arabs had moral superiority with the relations of Islam, not anymore. When difficult problems erupt, intelligent and competent leaders are always conscious and open to listening to voices of reason for change and reformation. If Saudi, Qatari, UAE and Kuwaiti leaders could sit together and face the mirror, it will substantiate a rational metaphor for peace and harmony. This will help all concerned to manage a navigational change and to solve the man-made problems. Most of the oil pumping Arab countries is merely a satellite of the US Military Empire and this need to be changed.

In his thoughtful analysis of the Western empire-building, Professor James Petras (“Networks of Empire and Realignments of World Power”, Dissident Voice), noted the following observations:

….In either private or state economic and/or military-led penetration, in furtherance of empire-building, the strategic purpose is to exploit the special economic and geopolitical features of the targeted country to create empire-centered networks. …..In the genocidal wars in the Middle East, anti-terrorism and anti-Islamic ideology are central…….The unity of purpose of European and US imperial regimes allowed for the peaceful joint takeover of the wealth of the new regions by private monopolies……Imperial Sequences: From War for Exploitation to Exploitation for War….”

Should there be a difference between lynching a man or putting one’s knee on his throat and choking him to his death?