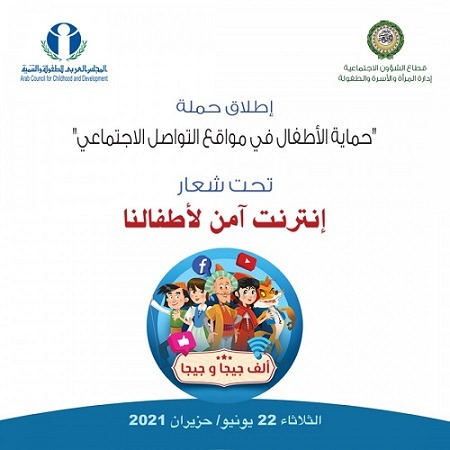 Cairo (UNA-OIC) – The General Secretariat of the Arab League, in partnership with the Arab Council for Childhood and Development (ACCD), will launch the campaign “Protecting children on social media” under the theme “A safe internet for our children”, on Tuesday via the digital platform.
The campaign aims to educate children and parents about the safe and rational use of the Internet, especially on social networking sites, and to avoid risks that may affect children and how to report if they occur, as a positive initiative towards strengthening joint Arab creative work to protect and promote children’s rights.
The campaign includes the production of high-quality cartoon videos for children, titled “A thousand giga and giga“.
The idea of the video series – consisting of five episodes – Is based on re-simulating the stories of the world-famous cartoon characters with a plot from the Internet to raise awareness of the mistakes that a child may make on the Internet, which in turn affects the events of the story. These characters include Juha, Sinbad, Cinderella and Little Red Riding Hood.
The event will be inaugurated by Assistant Secretary-General of the Arab League Ambassador Dr. Haifa Abu Ghazaleh; Chairman of the current session of the Arab Childhood Committee (Jordan); Head of the Follow-up Committee on Ending Violence Against Children (Sudan); and ACCD Secretary-General Dr. Hassan El-Bilawi.
The national mechanisms concerned with childhood in the Arab countries, representatives of relevant regional, international and national organizations, experts and specialists concerned with the fields of child development, arts and culture, and the media will participate in the launch of the campaign.
For registration to attend the launch of the campaign, click the below link:
https://docs.google.com/forms/d/e/1FAIpQLSfcrfmAZKino46sqGmGnT156TgsWHMwb2Z03cBPdzSQBgdYkg/viewform?usp=sf_link
To view the “promo” and watch the rest of the videos, click on this link:
https://www.youtube.com/playlist…