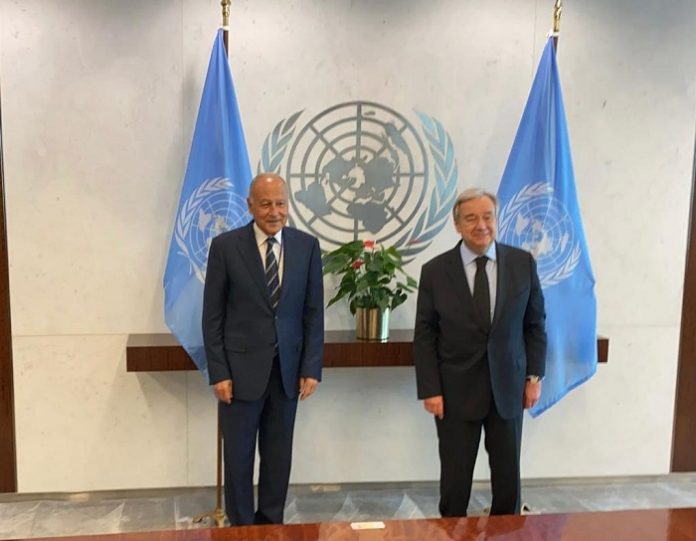 New York (UNA-OIC) – Secretary-General of the Arab League Ahmed Aboul Gheit and United Nations Secretary-General Antonio Guterres discussed the latest developments in the Middle East and explored ways of coordinating positions regarding them.

In a statement on Friday, the Arab League said that Aboul Gheit affirmed the League’s support for the path led by the UN Special Envoy Jan Kubis for positive outcomes from the Libyan political dialogue. He also stressed the importance of the commitment of all parties to hold the elections on their scheduled date (24 December 2021) and provide support to the Government of National Unity to carry out its tasks in this regard.

Aboul Gheit, who met with Guterres on the sidelines of his visit to New York, expressed his hope that the international community would be able to help the Lebanese people overcome this crisis, which is the most serious since the end of the civil war in 1990.

The statement explained that the meeting also dealt with the developments in dealing with the issue of the Grand Ethiopian Renaissance Dam (GERD), as Aboul Gheit reiterated the firm position of the Arab League in supporting the demands of Egypt and Sudan to reach a binding legal agreement that would prevent Ethiopia from the unilateral filling and operating of the dam.

The Arab League chief commended the UN for providing technical support to the African Union to enable the regional bloc to carry out the task entrusted to it in supervising the GERD negotiations.