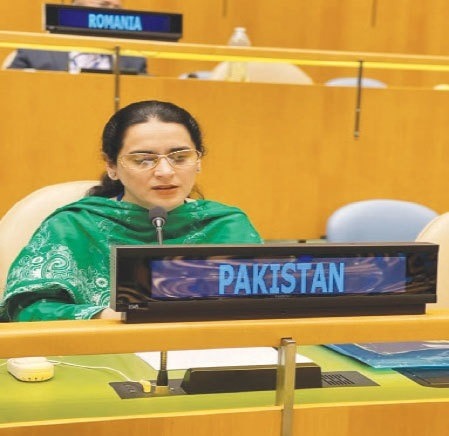 New York (UNA-OIC) – Pakistan has told a UN panel that enforced disappearances in Indian Illegally Occupied Jammu and Kashmir (IIOJK) was a “grim reality” of the seven-decade conflict there, and called for pursuing investigations into the cases.

Ms. Saleem, a counselor at the Pakistan Mission to the UN, said thousands of unmarked graves of such victims have surfaced in recent years.

Investigations held so far conclude that these victims were forcibly disappeared by occupation forces, and then tortured to death or summarily executed, she said in an interactive dialogue on enforced disappearances.

The occupying power, she added, continues to deny responsibility for 8,000 people forcibly disappeared from the occupied territory and is reluctant to carry out a forensic investigation into the 7,000 unmarked mass graves.

The Pakistani delegate also spoke during an interactive dialogue with the Special Rapporteur on Freedom of Expression and Opinion, Irene Khan. She said the oppressed people in IIOJK have been denied freedom of expression and opinion.

After India annexed occupied Kashmir on August 5, 2019, Ms. Saleem said a crackdown on the freedom of expression followed, including a complete internet blackout during which Kashmiris could not call the COVID-19 helpline services for medical assistance. Trade was adversely affected, leading to thousands of job losses.

Journalists faced formidable challenges amid a blanket ban on coverage of demonstrations and protests as also of human rights violations by occupation forces. They faced torture, harassment and arbitrary detentions under draconian laws. Foreign journalists have not been allowed in the occupied territory, the Pakistani delegate told the Special Rapporteur.