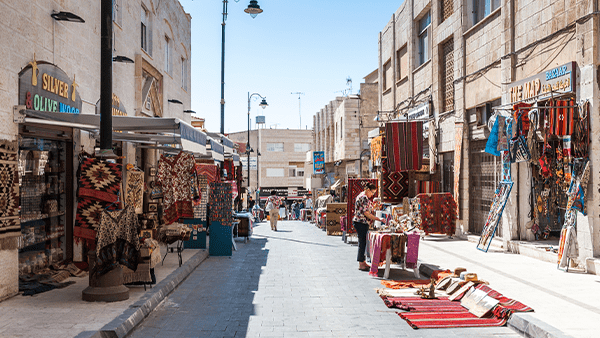 Amman (UNA-OIC) – The Jordanian Ministry of Tourism and Antiquities announced that Madaba, some 30km southwest of Amman, was named the Arab Tourism Capital for the year 2022, after meeting the criteria and terms of reference as stipulated by the Arab Tourism Organization (ATO).

In a statement on Monday, Minister of Tourism and Antiquities Nayef Fayez said that naming Madaba as the Arab Tourism Capital for 2022 will reanimate the tourism movement in the city, in particular, and Jordan, in general, in addition to attracting pioneering investment projects in various fields, investing the city’s unique natural, cultural and religious resources, increasing job opportunities and reducing unemployment.

The ministry, Fayez indicated, is striving to turn Madaba into a center for cultural and religious heritage and home to mosaics and handicrafts in the Kingdom, stressing that the city is rich in heritage and archaeological and religious monuments, and is famous for its historical monuments, the picturesque natural landmarks of distinctive valleys and unique mountain views.

For its part, ATO offered its congratulations to the ministry, pointing out that the organization is working hard, in cooperation with the ministry, to develop tourism in Jordan, which has potential and turn it into a special tourist destination for the Arab family.

The new selection criteria, it noted, focused on each city’s tourism management, infrastructure and resources, diversity of tourism patterns and activities, preservation and protection of the environment, response to tourism developments, desired results from tourism in the city, safety and security, tourism stability and health safety.

It stated that the aim of this initiative is to encourage the inter-Arab tourism movement while highlighting the uniqueness, customs and traditions of each city and their tourism value, as well as their role in supporting the Arab tourism industry and communicating with other cultures and civilizations.

Madaba, also known as the “City of Mosaics”, is rich in religious and historical heritage, including Mount Nebo, where it is believed that Moses was buried, and Umm ar-Rasas, which contains ruins from the Roman, Byzantine and early Muslim periods. The city also offers unique hiking trails with breathtaking landscapes for adventure lovers, such as the high cliffs of Wadi Zarq’a Ma’in, Wadi Balou’ and Wadi Hidan.