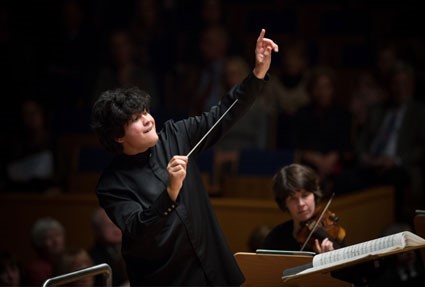 Strasbourg Philharmonic Orchestra was founded in 1855. It is one of the two permanent orchestras of the Opéra national du Rhin. In 1994, the orchestra acquired the official title of Orchestre philharmonique de Strasbourg – orchestre national.

At the age of 32, Aziz Shokhakimov has already developed his career as a conductor at a very high level. He was propelled to the forefront of the international scene aged 21, when he won the international Gustav Mahler Conducting Competition in Bamberg. He then went on to conduct renowned orchestras including SWR Sinfonieorchester, Elbphilharmonie Orchester, Orchestre Philharmonique de Radio France and London Philharmonic Orchestra.

He has a special relationship with the Salzburg Festival since winning the prestigious Salzburg Festival Young Conductors Award in August 2016. Over the coming seasons, he will make his début with the Wiener Symphoniker, Luzern Sinfonieorchester and Seoul Philharmonic Orchestra.

Aziz Shokhakimov is equally well-known for his operatic repertoire and since 2015 has held the position of Kapellmeister at Deutsche Oper am Rhein in Düsseldorf. He was also invited to conduct a new production at the Festival d’Aix-en-Provence.