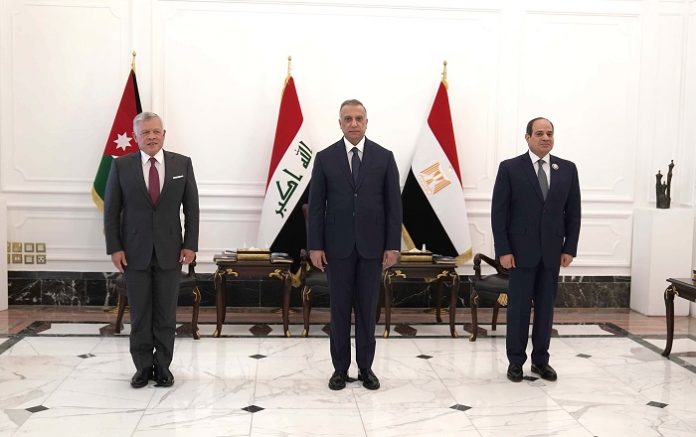 Baghdad (UNA-OIC) – The Tripartite Summit, held in Baghdad on Sunday between the leaders of Jordan, Iraq and Egypt, reaffirmed the leading role of Jordan in protecting the Islamic and Christian sanctities in Jerusalem from Israeli violations.

The summit that was held to discuss a plethora of issues of joint interest between the three countries had the Palestinian struggle on the top of its agenda.

Jordanian King Abdullah II, Egypt’s President Abdel Fattah El-Sisi and Iraq’s President emphasized the importance of establishing a Palestinian state on the June 4, 1967 borders with East Jerusalem as its capital according to international law and relevant UN resolutions. They also called for an end to the unilateral Israeli measures undermining peace, chiefly the attempt to change the “legal and historical” reality in Occupied Jerusalem.

The summit praised Egypt’s role in brokering a ceasefire agreement in the Gaza Strip, ending a recent 11-day flare-up that saw hundreds of Palestinians killed and wounded. Jordan and Iraq welcomed Egypt’s initiative to rebuild Gaza as part of the international effort.

The summit commended Jordan’s unflagging effort to stop the Israeli violations in the occupied Palestinian territories, especially in Jerusalem.

The summit that builds on previous summits also held high Baghdad’s effort to uphold regional stability and security as well as ending regional crises by promoting dialogue. It also praised Baghdad for its role in combatting terrorism, lauding the Iraqi people’s sacrifices and the Iraqi army’s contributions to upholding Iraq’s stability and that of the region.