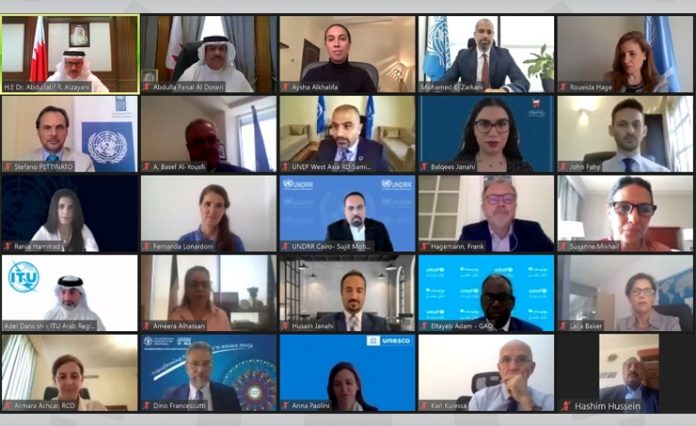 A signing ceremony for the framework was held virtually, in the presence of Assistant Foreign Minister Abdullah bin Faisal bin Jabur Al Doseri and UN Regional Director for Arab States Laila Baker, as well as a number of those concerned at the Ministry of Foreign Affairs.

On this occasion, Foreign Minister Al Zayani affirmed that the Strategic and Sustainable Development Cooperation Framework is a continuation of the previous steps within the framework of continuous and growing cooperation between Bahrain and the UN in various fields and levels. He underscored that the framework also reflects the joint keenness to develop this cooperation, in a way that supports the implementation of the government’s action plan 2019-2022 and the Bahrain Economic Vision 2030, with its alignment with the implementation of the sustainable development goals, especially in light of the current circumstances and the efforts of the Kingdom of Bahrain to confront the coronavirus pandemic.

Al Zayani thanked the Resident Coordinator for his continuous efforts in preparing the framework in cooperation with the Organizations and Legal Affairs Sectors at the Ministry of Foreign Affairs and all relevant government agencies and institutions. He appreciated, in this regard, all the representatives of the UN regional and resident agencies for their good cooperation, expressing his aspiration that this agreement would continue the constructive and continuous cooperation between the Kingdom of Bahrain and the UN.

Assistant Minister of Foreign Affairs Al Doseri praised the efforts of the UN to sign the Strategic and Sustainable Development Cooperation Framework (2021-2022) and described this initiative as an example of constructive cooperation between the United Nations and the Kingdom of Bahrain.

Al Doseri also welcomed the new agencies in the updated version of the framework, which in turn will enhance support and cooperation in future projects. He further affirmed the Kingdom of Bahrain’s keenness to work jointly with various UN agencies.

For his part, UN Resident Coordinator Al Zarkani thanked the Kingdom of Bahrain and the UN agencies for their diligent efforts in bringing about the updated version of the framework. He also affirmed that the Strategic and Sustainable Development Cooperation Framework (2021-2022) between Bahrain and the UN agencies is fully compatible with the development strategies and policies of the Kingdom, and it also provides a platform for greater coordination of the implementation of support projects from the UN agencies.

In her speech, UN Regional Director for Arab States Laila Baker expressed great optimism about what the signing of this framework would achieve, especially in light of what the whole world is going through in the face of the COVID-19 pandemic, which in turn led to a lot of delay of development goals. She underlined that such an event, the first of its kind in the Arab region, gives hope for the possibility of a multilateral partnership to lay down the necessary plans to build a better tomorrow for the peoples of the region and the world.