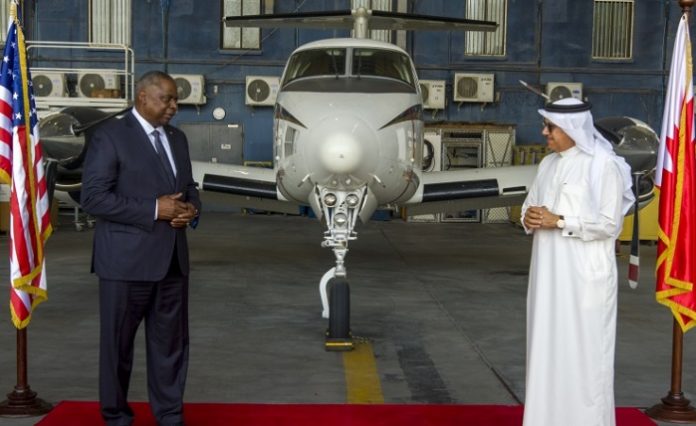 Manama (UNA-OIC) – Bahraini Foreign Minister Dr. Abdullatif bin Rashid Al Zayani held a joint press conference with US Defense Secretary Lloyd James Austin, who was on a visit to the Kingdom of Bahrain.

Austin stressed his country’s appreciation for Bahrain’s support to humanitarian efforts to evacuate people who transited the Kingdom before heading to the United States, which showed the importance of joint cooperation between the two countries.

The two sides also reiterated the importance of their strategic cooperation, particularly in the defense, military and humanitarian fields. They noted US-Bahrain’s role in supporting peace, security and stability in the Arabian Gulf region and the Middle East.

The US Defense Secretary also congratulated the Bahraini monarch on signing the Abraham Peace Accords, stressing the importance of the agreement in supporting regional peace and stability.

“Bahrain and the US reiterated their commitment to combat terrorism and target those who harbor terrorists,” said Dr. Al Zayani, adding that both sides attach great importance to their partnership.

Austin extended thanks to the King and the Crown Prince and Prime Minister for Bahrain’s support of the evacuation operations from Afghanistan. He noted the solid bilateral relations and underlined his keen interest to further strengthen defense partnership, reiterating thanks to Bahrain for hosting the US forces.

Austin said that he had also met with members of Taskforce 58 who worked in tandem with the Bahrain Defence Force to facilitate the evacuation operations from Afghanistan via the Kingdom.