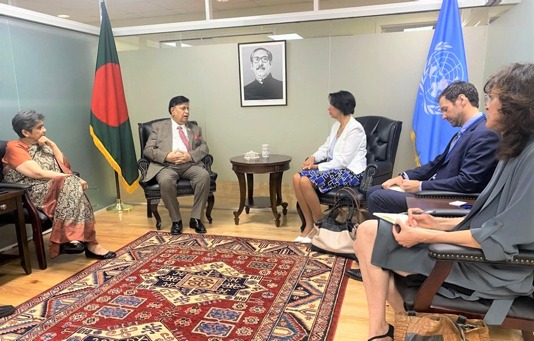 Dhaka (UNA-OIC) – Bangladeshi Foreign Minister Dr. AK Abdul Momen, who is now visiting the US, has sought a ‘clear roadmap’ from the United Nations regarding early repatriation of forcibly displaced persecuted Rohingyas from Bangladesh to their land of origin in Myanmar.

“We need a clear roadmap from the UN for repatriation of Rohingyas to Myanmar,” Momen said at a bilateral meeting with UN Special Envoy for Myanmar Christine S. Burgener, at the Bangladesh Permanent Mission in New York on Wednesday.

The foreign minister said the solution to the Rohingya crisis lies in their safe and sustainable repatriation to Myanmar, which couldn’t even be commenced in the last four years.

During the meeting, Momen referred to the negative impacts of the Rohingya’s protracted presence in Cox’s Bazar, particularly for the host community. He stated that if repatriation doesn’t commence soon, it would only deteriorate the overall situation there and create instability in the region and beyond.