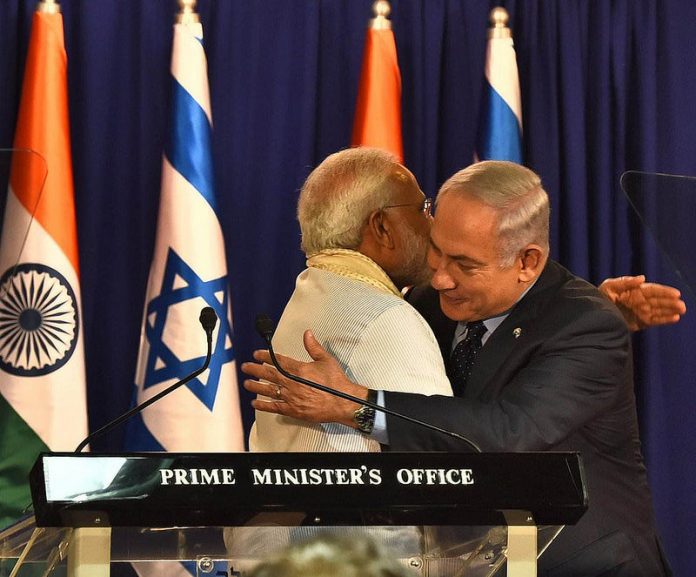 On a massive drive to cast Israel as a “normal democracy” and woo audiences in India’s film-crazy population, its war criminal leader Benjamin Netanyahu made a whirlwind tour of India.

Hosted by fellow rightwinger Narendra Modi, who as leader of an extremist movement known as Bharatiya Janata Party (BJP), has yet to stand trial for his key role in the Gujarat massacres. At the time in 2002, he was Chief Minister of Gujarat when his party’s faithful went on a killing spree targeting Muslims.

Reports reveal the brutality of the anti-Muslim pogrom which saw women raped and set alight after being doused in paraffin, families mowed down in cold blood and Modi fingered for having allowed the merciless atrocities to continue.

Sixteen years later, despite being the leader of India, Modi remains accused as the mastermind of a premeditated form of ethnic cleansing. Many independent probes suggest that it was carried out with the complicity of the Gujarat state government and its security forces.

Having defeated India’s traditional anti-colonial movement which was the home of most of the country’s well-known liberation struggle leaders against British imperialism, the BJP has not only turned the clock back, but has revised history to erase the crucial role of the Indian Congress.

Modi as chief ideologue of the BJP’s divisive sectarianism has thrived by pursuing policies characterized by rhetoric rather than substance. Buoyed by Fox News type praise singers and masses of unemployed hopefuls, Modi’s charismatic personality has helped to sustain a veneer of “India First” while gaps between rich and poor tell a different story.

It is this context which explains why Modi has found affinity with Israel and struck overtly friendly relations with Netanyahu. Some commentators have correctly described it as “birds of a feather…” type of treachery which refutes India’s anti-colonial history particularly its pioneering position in the setting up of the Non-Aligned Movement (NAM).

Modi and the BJP leave no doubt that despite India’s previous pro-Palestinian stance which was in tandem with its opposition to South Africa’s apartheid regime, his romance with Israel is an attempt to erase from memory that crucial era.

And by assisting Netanyahu to cast Israel as a “benevolent friend of India”, Modi has scripted a role for Bollywood’s super-stars. Shocking yet not surprising that this billion-dollar industry has willingly rushed to usher in stars such as Amitabh Bachan onto the stage taking selfies with a known child-killer.

So what’s in it for Israel and why?

A film magazine reports that Bollywood actors Jacqueline Fernandez and Sushant Singh Rajput touched down in Tel Aviv last month, accompanied by an 80-strong crew, to shoot scenes for “Drive,” the first Hindi film to be set in Israel.

“The film, an Indian-style spin on ‘Fast and the Furious,’ was partly funded by a number of Israeli government arms, including the Tourism Ministry and the Prime Minister’s Office.”

The report claims that when “Drive” premieres on the subcontinent in 2018, Israel’s leaders hope it will provide a priceless advertising opportunity for tens of millions of potential Israeli tourists from India.

“We’ve done research and we know there is film tourism around the world. I taught for a year at Georgetown and everyone wanted to see where ‘The Exorcist’ was filmed,” says Michael Oren, the former Israeli ambassador to the U.S.

And here’s the catch: “There’s a diplomatic benefit to just having their film stars here.”

Shedding further light, the report goes on to explain that the India-Israel film collaboration is not a one-off project. “Its model is almost identical to a similar multi-pronged outreach model that Israel honed with China following the 2014 Gaza War, which had temporarily laid waste to tourism.”

In contrast to China’s participation, the bloody slaying of Palestinians in Gaza by Netanyahu’s war-monger regime struck a devastating blow to Israel’s efforts to lure American television productions: FX’s “Tyrant” and USA’s “Dig” both had to frantically relocate in the midst of that crisis, which was both humiliating and expensive for Israeli showrunners, according to the report.

With Modi’s direct intervention, it appears that Bollywood is on route to be captured by a settler colonial regime.

“The formula is simple: Israel offers investments and attractive tax rates to productions in exchange for guaranteed footage of the country’s landscapes and cities in the final product that will be shown, on screen, to millions of potential tourists from Asia,” reports the magazine.

If it has worked with China why not with India?

For Bollywood, it means rebate structures, cash up front and all that’s required in turn is for its stars to pretend that not a single Palestinian is oppressed nor occupied. If Amitabh Bachchan’s selfie provides a clue about his reckless disregard for fundamental human rights, being an icon of Bollywood, his act gives the green light to his peers and understudies to do likewise.

India currently holds 14 bilateral film treaties, and if Oren gets his way, Israel will become the 15th: he hopes for a signed film treaty between the two nations by next spring. Not surprising thus that Shalom Bollywood featured so prominently during Netanyahu’s trip.

In a further revelation, Oren explained why Indian productions are particularly alluring for Israel: not just because of the sheer size of Bollywood’s influence, but also because of the demographic makeup of its vast audience.

And here’s a further catch: “This is about how important it would be for Israel to have a Bollywood film shot here watched in Muslim countries.”

The Modi-Netanyahu love match would be a compelling story on the big screen, providing the scriptwriters are bold enough to include all the gory details of their respective wars and continuous defiance of international legal instruments.

Just as Gaza demands the lifting of Israel’s crippling inhumane and illegal siege, so too does Gujarat demand justice. Oblivious of the furor, the perpetrators of crimes against humanity stroll around in defiance. Looking on in disbelief, victims of their crimes wonder whether any of Bollywood’s producers and stars will realize the folly of allying with an apartheid regime.