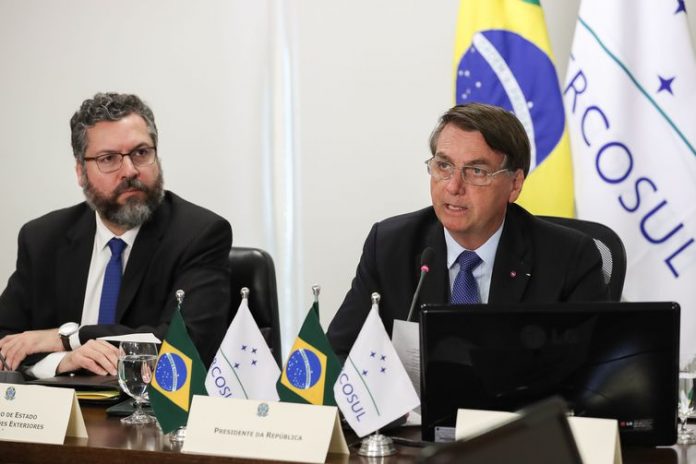 President Jair Bolsonaro said today (2) Mercosur is part of the solutions that Brazil and other bloc nations are building for the recovery of the economy amid the COVID-19 pandemic.

“The coming months will be long challenges to us, the biggest of which, which has not delayed in making itself manifest, is to combine protecting people’s health and the need to restore the economy. I’m convinced that Mercosur is part of the solutions we’re building,” said the president, who took part this Thursday in the 56th summit of heads of state of Mercosur and Associate States, for the first time held online. The assembly was the last one under the leadership pf Paraguay, which will now pass Mercosur’s pro tempore presidency on to Uruguay.

In his address, Bolsonaro noted that Brazil “fully endorsed the priorities of Paraguay’s presidency, which deepened the modernization of Mercosur and turned the bloc into a key ally in the ambitious agenda of reforms” implemented by the Brazilian government. “In the efforts for the construction of a more prosperous country, we also seek a greater and better insertion of Brazil into both the region and the world, and Mercosur is our main tool in this insertion,” the president argued.

In 2019, Brazil exported some $15 billion to Mercosur nations and imported around $13 billion—a surplus of $2 billion, as per official data.

Bolsonaro praised Paraguay’s presidency over the settlement of “pending details” in bloc deals with the European Union and the European Free Trade Association (EFTA), inked in 2019, and urged all presidents to work on negotiations to ratify the agreements this year. In order for such pacts to be brought into force, the congress of all countries making up the economic blocs must approve the texts.

In this regard, Bolsonaro also pledged to continue the dialog with different interlocutors “in order to change distorted opinions about Brazil and to expose the measures he has taken in favor of the protection of the Amazon forest and the well-being of the indigenous population.” The president was referring to an alleged resistance on the part of European countries in closing deals for not believing in Brazil’s environmental policy.

Bolsonaro also mentioned plans to advance understandings with other nations. “We want to make progress in open talks with Canada, Korea, Singapore, and Lebanon, as well as to expand current deals with Israel and India and open new fronts in Asia. And we’re thoroughly interested in seeking treaties with countries in Central America.”

The Brazilian leader also supports discussions on the inclusion of the auto and sugar sectors under the regime of common rules within the bloc.

Mercosur is made up of Argentina, Brazil, Paraguay, and Uruguay. Venezuela has been suspended since 2017 over a breach in the democratic order and for failing to comply with bloc clauses linked to human rights. The associated countries are Chile, Bolivia, Peru, Colombia, Ecuador, Guiana, and Suriname.