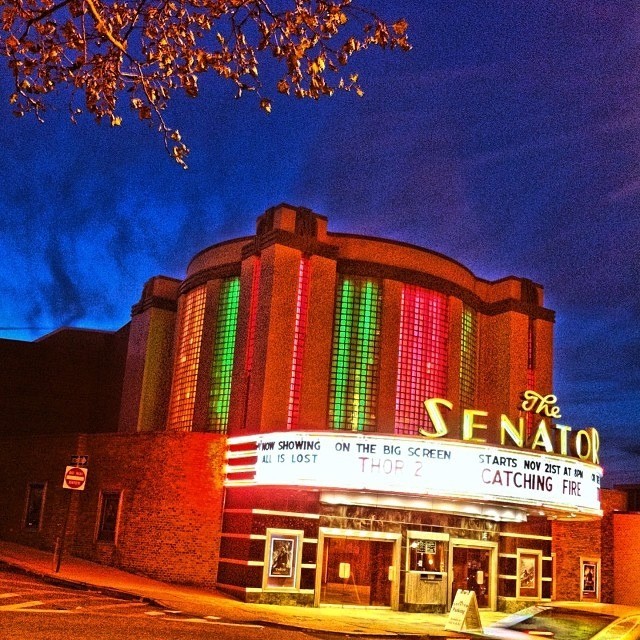 On Saturday afternoon, October 28, 2017, Ms. Davis gave a talk about her literary effort at the Gallery CA, 440 E. Oliver St., at the corner of Greenmount Ave. The event featured 19 of the hundreds of photos she took for the book. The exhibit is entitled, “Home Movies: Portraits of neighborhood movie houses.” (This gallery presentation will end on November 12th.)

Naturally, I got very excited when I saw the Deluxe my old neighborhood (Locust Point) movie house included. More about the Deluxe in a moment.

Ms. Davis mentioned that there were once 240 theaters in Baltimore. Over nine years, she did some remarkable research, then selected 74 movie houses to feature in her 300 plus page book.

The book, which is also a history of the great movie house era, opens with a foreword by Baltimore’s own Barry Levinson. He chats about his earliest movie experiences as a youngster – probably “seven or eight years old.” Levinson was captivated by the movies he attended, seeing them as “perhaps step one to my future.”

The preface is a must-read. The author sets up the challenges she encountered in writing the book. Ms. Davis mentions there are “300 interviews” in her tome. West Baltimore theaters get equal billing with South, East and North Baltimore movie houses. The anecdotes, she continues, “reveal the powerful connections we all experience in a darkened theater.”

The first movie house lauded is the “Electric House,” it dates back to before Larry King was born – 1896. The author finishes up with the Parkway and the CineBistro. They were the latest jewels to come on board in – 2017. One of Ms. Davis’ lines from the preface cuts to the chase with respect to the changing movie scene over the years. She writes: “The only certainty is that nothing stays the same.”

Ralph Moore, a popular community activist, shared his memories of the “Harlem” theater in West Baltimore. He said: “The only worry was that a rat could come scurrying across your feet. The Harlem was a true adventure, a true competition for any action on the screen.”

George Figgs, artist, film historian, actor and the former operator of the Orpheum Theatre in Fells Point, gets a lot of deserved ink in the book. I recall seeing a movie there a few years back. It was one of my faves, “LA Confidential.” Figgs developed his movie habit growing up in Hampden (Hon).

In his salad day, Figgs was a projectionist at the Charles Theater. Later, he worked for about two years as a “daily projectionist” on some of the Hollywood movies being made in Baltimore. Figgs is a true Renaissance Man. Ms. Davis rightly titled him: “The high priest of celluloid.”

Getting back to my home base, the Deluxe movie house on Fort Avenue – Ms. Davis was kind enough to include my anecdote about it on page 112.

I feel compelled, however, to add another: I remember going to an early show at the movie when I was about 12 years old. After I left, I needed to relieve myself, I went around to the back of the Deluxe. Just as I was finishing up my business, a cop car pulled up and put a flashlight on me. Out of the car stepped one Sergeant Frank Battaglia.

My heart stopped! Battaglia was “Mr. Law & Order” himself. Later on, he devised the controversial “Battaglia Plan” and became the Police Commissioner of Baltimore City. He roughly snapped at me. I thought, oh Lord, I’m going to spend the night in the lock-up in the Southern District. Battaglia gave me the “third degree.” I suspect he knew my dad who was a boss on the waterfront. In any event, to my relief, he just barked at me: “Go on home and behave yourself.” I responded meekly: “Thank you, sir!”

Ms. Davis also highlighted the Patterson Theater in her book. Now, it’s the home of “Creative Alliance,” located in heart of East Baltimore’s Highlandtown. Back in the late 50s, I was dating a “Hon” from Highlandtown. She became wife No.1.

This is what our typical date night looked like: Movie at the Patterson, a pizza at Matthews across the street, and then a draft beer at a pub close to her Fait Avenue address. Cost, seriously: try around $10.

I attended Calvert Hall High School, when it was located at Mulberry and Cathedral Street, across from the Pratt (1951-55). So, I got a chance to attend many of the downtown theaters, like: the Mayfair, the Town (now Everyman), the Hippodrome, the Stanley and the Century.

On a date with my Highlandtown Hon at the Century, located at 18 W. Lexington Street, I recall seeing a Baltimore Colts football player. It was Alan “The Horse” Ameche. This was probably around 1957. On Dec. 28, 1958, I would be in Yankee Stadium, watching Ameche (now deceased) scoring the winning TD in overtime against the New York Giants in an NFL championship game. Yes, the Hon was with me.

At the end of the book, there are two full pages, listing all 74 of the movie houses included in the volume. Plus, there is an excellent map which reveals where they were located in the city.

Before I go, I must mention some other movies houses that were within striking distance of my Locust Point base. There was the Echo on Fort Avenue near Light St., the Beacon and the McHenry also on Light, near the Cross Street Market. And just opposite the Market on Charles Street was the Garden Theater. My father said there was once a bowling alley on that site, where as a teenager, he would work setting up the pins.

Well, on that note, I going to say goodbye to my fond memories and Ms. Davis’ classic book of “Flickering Treasures.” This book belongs in the library of every Baltimorean that loves movies and their city’s history.