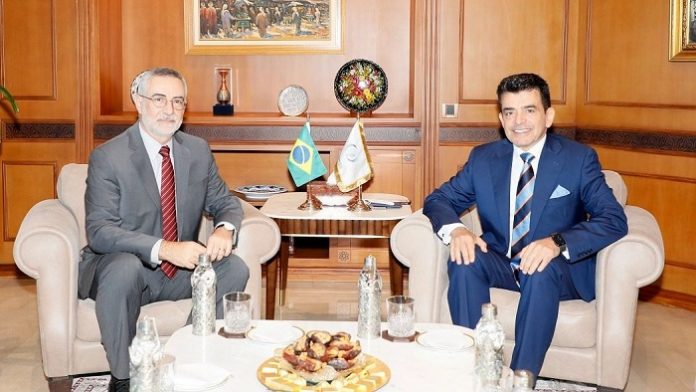 During the meeting, the Brazilian diplomat examined with the Director-General cooperation between ICESCO and Brazil in the Organization’s fields of action and the legal procedures required for Brazil’s joining ICESCO as an observer state.

The meeting held at ICESCO headquarters in Rabat was attended by many of the Organization’s sector and department directors. Dr. AlMalik reviewed the main programs and initiatives currently being implemented by ICESCO, including the training program for youth and women in leadership in the fields of education, science and culture, through leadership incubators that ICESCO has launched at its headquarters, as well as working to support the creation of similar incubators in the Member States.

The ICESCO chief reviewed the main programs and activities implemented in celebration of “ICESCO Year of Women 2021,” proclaimed in honor of women who bear many burdens and have been on the front line during the COVID-19 pandemic with the high patronage of King Mohammed VI of Morocco.

He also noted that this celebration witnessed high-level participation among first ladies, female figures, and leaders of international organizations, and was largely circulated in mainstream and social media.

The meeting discussed legal procedures for countries joining ICESCO as observers. The ambassador stressed the interest of Brazil in this issue to strengthen cooperation with the Organization and the countries of the Islamic world.

Bitelli welcomed the proclamation by ICESCO of 2021 as the Year of Women, stressing that it is a distinct concept as women are the pillars of society and play a major role in all fields. He expressed Brazil’s wish to participate in the activities that ICESCO intends to undertake in the next phase.