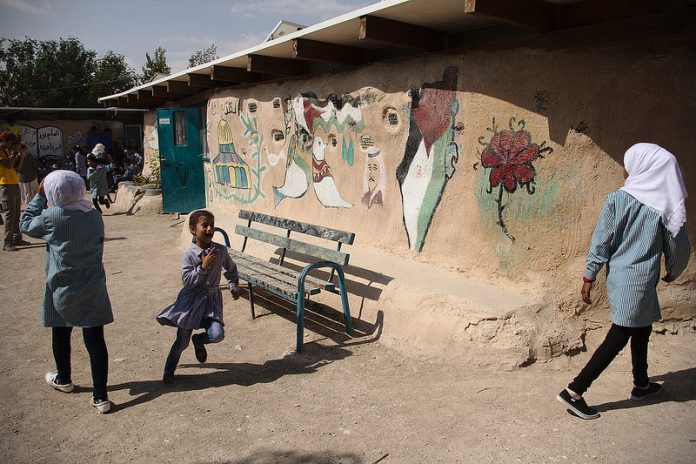 Israel finally built an access road to the West Bank village of Khan al-Ahmar last week, after half a century of delays. But the only vehicles allowed along it are the bulldozers scheduled to sweep away its 200 inhabitants’ homes.

If one community has come to symbolize the demise of the two-state solution, it is Khan al-Ahmar.

It was for that reason that a posse of European diplomats left their air-conditioned offices late last week to trudge through the hot, dusty hills outside Jerusalem and witness for themselves the preparations for the village’s destruction. That included the Israeli police viciously beating residents and supporters as they tried to block the advance of heavy machinery.

Britain, France, Germany, Italy and Spain have submitted a formal protest. Their denunciations echoed those of more than 70 Democratic lawmakers in Washington in May – a rare example of US politicians showing solidarity with Palestinians.

It would be gratifying to believe that Western governments care about the inhabitants of Khan al-Ahmar – or the thousands of other Palestinians who are being incrementally cleansed by Israel from nearby lands but whose plight has drawn far less attention.

After all, the razing of Khan al-Ahmar and the forcible transfer of its population are war crimes.

But in truth, Western politicians are more concerned about propping up the illusion of a peace process that expired many years ago than the long-running abuse of Palestinians under Israeli occupation.

Western capitals understand what is at stake. Israel wants Khan al-Ahmar gone so that Jewish settlements can be built in its place, on land it has designated as “E1”.

That would put the final piece in place for Israel to build a substantial bloc of new settler homes to sever the West Bank in two. Those same settlements would also seal off West Bank Palestinians from East Jerusalem, the expected capital of a future Palestinian state, making a mockery of any peace agreement.

The erasure of Khan al-Ahmar has not arrived out of anywhere. Israel has trampled on international law for decades, conducting a form of creeping annexation that has provoked little more than uncomfortable shifting in chairs from Western politicians.

Khan al-Ahmar’s Bedouin inhabitants, from the Jahalin tribe, have been ethnically cleansed twice before by Israel, but these war crimes went unnoticed.

The first time was in the 1950s, a few years after Israel’s creation, when 80 percent of Palestinians had been driven from their homes to clear the path for the creation of a Jewish state.

Although they should have enjoyed the protection of Israeli citizenship, the Jahalin were forced out of the Negev and into the West Bank, then controlled by Jordan, to make way for new Jewish immigrants.

A generation later in 1967, when they had barely re-established themselves, the Jahalin were again under attack from Israeli soldiers occupying the West Bank. The grazing lands the Jahalin had relocated to with their goats and sheep were seized to build a settlement for Jews only, Kfar Adumim, in violation of the laws of war.

Ever since, the Jahalin have dwelt in a twilight zone of Israeli-defined “illegality”. Like other Palestinians in the 60 percent of the West Bank declared under Israeli control by the Oslo peace process, they have been denied building permits, forcing three generations to live in tin shacks and tents.

Israel has also refused to connect the village to the water, electricity and sewage grids, in an attempt to make life so unbearable the Jahalin would opt to leave.

When an Italian charity helped in 2009 to establish Khan al-Ahmar’s first school – made from mud and tyres – Israel stepped up its legal battle to demolish the village.

Now, the Jahalin are about to be driven from their lands again, as though they are nothing more than wayward cattle. This time they are to be forcibly resettled next to a waste dump by the Palestinian town of Abu Dis, hemmed in on all sides by Israeli walls and settlements.

In the new location, they will be forced to abandon their pastoral way of life. As a resident, Ibrahim Abu Dawoud observed: “For us, leaving the desert is death.”

In another indication of the Palestinians’ dire predicament, the Trump administration is expected to propose in its long-awaited peace plan that the slum-like Abu Dis, rather than East Jerusalem, serve as the capital of a future pseudo-Palestinian state – if Israel ever chooses to recognize one.

Khan al-Ahmar’s destruction would be the first demolition of a complete Palestinian community since the 1990s, when Israel ostensibly committed to the Oslo process.

Now emboldened by Washington’s unstinting support, Benjamin Netanyahu’s government is racing ahead to realize its vision of a Greater Israel. It wants to annex the lands on which villages like Khan al-Ahmar stand and remove their Palestinian populations.

There is a minor hurdle. Last Thursday, the Israeli supreme court tried to calm the storm clouds gathering in Europe by issuing a temporary injunction on the demolition works.

The reprieve is likely to be short-lived. A few weeks ago the same court – in a panel dominated by judges identified with the settler movement – backed Khan al-Ahmar’s destruction.

The Supreme Court has also been moving towards accepting the Israeli government’s argument that decades of land grabs by settlers should be retroactively sanctioned – even though they violate the Israeli and international law – if carried out in “good faith”.

Whatever the judges believe, there is nothing “good faith” about the behavior of either the settlers or Israel’s government towards communities like Khan al-Ahmar.

Saeb Erekat, the Palestinians’ veteran peace negotiator, recently warned that Israel and the US were close to “liquidating” the project of Palestinian statehood.

Sounding more desperate than usual, the Europe Union reaffirmed this month its commitment to a two-state solution, while urging that the “obstacles” to its realization be more clearly identified.

The elephant in the room is Israel itself – and its enduring bad faith. As Khan al-Ahmar demonstrates all too clearly, there will be no end to the slow-motion erasure of Palestinian communities until western governments find the nerve to impose biting sanctions on Israel.