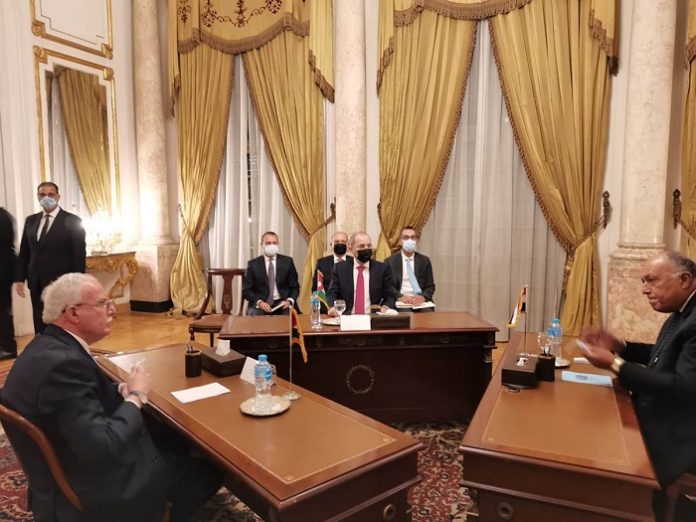 Cairo (UNA-OIC) – Jordanian Deputy Prime Minister and Minister of Foreign Affairs and Expatriates Ayman Safadi held Thursday a tripartite meeting in Cairo with Egyptian and Palestinian Ministers of Foreign Affairs Sameh Shoukry and Riad Malki as part of ongoing coordination and discussions on the developments of the Palestinian issue.

The tripartite meeting comes within the framework of following up on the outcomes of the Jordanian-Egyptian-Palestinian summit that was held in Baghdad in early September, to revitalize efforts aimed at re-launching negotiations, work with partners to revive the peace process in accordance with the approved terms of reference, and to coordinate positions prior to holding the 76th session of the United Nations General Assembly.

During the meeting, Safadi stressed the need to boost efforts at the regional and international levels to find “a real political horizon” that would re-launch serious and effective negotiations on the basis of the two-state solution, guaranteeing an independent and sovereign Palestinian state on the June 4, 1967 borders, with East Jerusalem as its capital, in accordance with international law, approved international references and the Arab Peace Initiative.

Safadi and his Egyptian and Palestinian counterparts indicated that the Palestinian cause is a central Arab issue, and said they have tackled means to engage the stakeholders in the peace process. They stressed that the relevant international legitimacy resolutions and the Arab Peace Initiative are a reference point for negotiation, which is the only way to bring about peace.

The three ministers agreed on continuing a push to mobilize international and regional positions to confront the illegal Israeli measures in Jerusalem, Gaza and the rest of the occupied Palestinian territories, which involve illegal practices that violate international law and undermine the two-state solution and the chances of achieving a just, comprehensive and lasting peace in the region.

The ministers stressed the need to maintain the historical and legal status quo in Jerusalem and its Muslim and Christian holy sites, and to reject all practices aimed at compromising this situation.

The ministers agreed to continue the process of consultation and coordination to serve the Palestinian cause and to enhance joint Arab action.