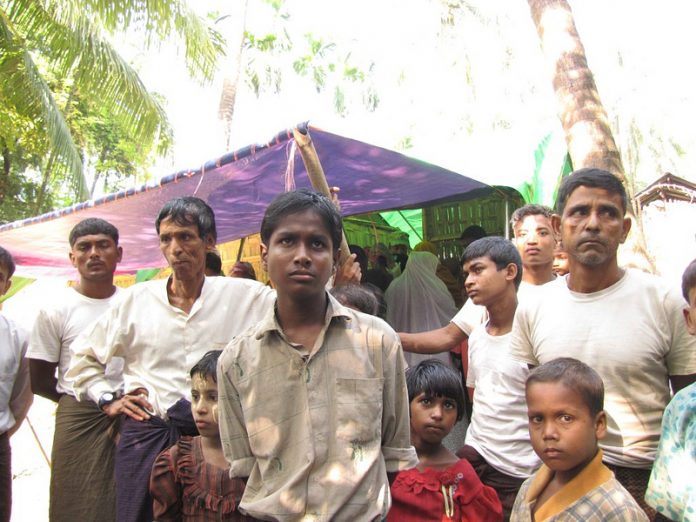 The Rohingyas are victims of a ‘slow-burning genocide’ that is perpetrated as a national project in Buddhist Myanmar (formerly Burma). Some 700,000 Rohingyas have been forced out of their ancestral homes in western Rakhine (formerly Arakan) state since September 2017 to seek refuge inside Cox’s Bazar of Bangladesh. Hundreds of thousands of Rohingyas have also been living as internally displaced persons (IDPs) inside the Apartheid Myanmar since 2012. The International Rescue Committee (Nov. 15, 2017) estimated that there were 75,000 victims of gender-based violence (meaning rape), and that 45% of the Rohingya women attending safe spaces in Cox’s Bazar in Bangladesh had reported such attacks.  Doctors Without Borders (MSF) has estimated that at least 6,700 Rohingya were killed in the first month of the crackdown alone. Credible estimates suggest that tens of thousands of Rohingyas may have been killed by Tatmadaw (Myanmar security forces that are more commonly known as the ‘rapist army’) and their civilian partners-in-crime within the mostly Rakhine Buddhist population.

According to satellite imagery (March 2018), more than 360 Rohingya villages had been partially or completely destroyed by Buddhist forces since August, with at least 55 villages completely bulldozed, removing all traces of buildings, wells and vegetation.

An international conference on “Rohingya Crisis and Solution” was convened on May 2, 2018 in Cologne, Germany. It was hosted by the Hasene IGMG (a not-for-profit organization of Turkish people working in Germany) and attended by some 500 participants from all over the globe and comprised representatives from the diplomatic corps, international organisations, human rights groups, academia, civil society, non-governmental organisations and media, as well as leaders of the Rohingya organisations.

Muhammad Turhan, Mesud Gulbahar and Kemal Ergun from Hasene IGMG welcomed the attendees to Cologne, which is the fourth most populated city in Germany. The keynote speech for the morning session was delivered by Philip Ruddock, ex-MP (1973-2016) who had served as a cabinet minister during the Howard Government and then as the Attorney General. He highlighted the importance of holding the murderous Myanmar regime accountable for its genocidal crimes. The speakers and panelists included Professor Abid Bahar (from Montreal, Canada), Prof. Michael Charney (University of London, School of Oriental and African Studies), Jacob Sterken (from Canada) who is the co-founder of the Euro-Burma Office, and Nurul Islam, Chairman of ARNO (Arakan Rohingya National Organization). They discussed various aspects of history of Arakan showing the indigenous root of the Rohingya people there.

Mr. Islam thanked Bangladesh government of Prime Minister Sheikh Hasina for letting the fleeing Rohingya refugees to take shelter inside Bangladesh and for bringing their plight to the international community, including the UN. He and other speakers urged the Government of Bangladesh not to forcibly resettle the refugees inside Myanmar until and unless they are truly secured with equal rights as citizens of Myanmar.

The keynote speaker for the second session was Tansri Dr. Syed Hamid Albar who had held multiple ministerial positions in Malaysia, including the foreign ministry. He discussed how the government of Myanmar had abused the openness shown by the ASEAN that did not want to interfere in internal affairs of a fellow block member. The speakers and panelists included (besides myself) Dr. Maung Zarni (from the UK) – a fellow human rights activist and Burmese dissident, Imam Dr. Abdul Malik Mujahid (Chairman, Burma Task Force, USA) and Mehmet Ozturk of Anadolu Agency.

The theme of the second panel discussion was around genocidal crimes against the Rohingyas of Myanmar. We stated categorically that genocide is a process that goes through several stages; it does not happen by accident but is a deliberate act with warning signs. We also reiterated that Myanmar had committed four out of the five acts of genocide as spelled out by the 1948 Convention on the Punishment and Prevention of the Crime of Genocide, while just one of those acts is sufficient to incriminate a group or state for such crimes.

We urged the international community to punish the criminals – state and non-state actors – including those (e.g., fascist academics like Dr. Aye Chan and bigoted monks like Wirathu) who provoked (and continue to provoke) genocidal crimes against the Rohingya people. Dr. Mujahid shared the opposition routinely faced by Burma Task Force – an advocacy group for human rights in Burma – from the lobby groups representing India, Indonesia and the Jewelry merchant group in the U.S. State Department. He also shared information that the Amnesty International and Human Rights Watch – two of the major human rights groups –  are opposed to any comprehensive sanction imposed on Myanmar, thus, making the task of changing the policy in Washington D.C. an arduous one, if not a zero-sum activity.

We, the speakers, highlighted the fact that genocide against Rohingya has continued this long because of ignoring early warning signs since at least the early 1990s when some 270,000 Rohingyas were forced to take shelter inside Bangladesh when Pyi Thaya operation was launched by the Myanmar security forces. It was the second such massive operation in 14 years when Naga Min (King Dragon) operation in 1978-79 forced the exodus of nearly 300,000 Rohingyas to Bangladesh. Even the 2012 genocidal pogroms that led to internal displacement of nearly 150,000 Rohingyas were not taken seriously by the international community, including the next-door Bangladesh government, despite serious urging from human rights activists and genocide experts/scholars.

The keynote speaker for the third session was Professor David Scheffer who is the Mayer Brown/Robert A. Helman Professor of Law, and Director, Center for International Human Rights at the Northwestern University, Chicago, USA. He joined via Skype and discussed issues surrounding genocidal and war crimes. The speakers and panelists included Dhaka University (Bangladesh) professors of International Relations: Drs. Chowdhury R. Abrar and Imtiaz Ahmed. The other speakers included Harn Yawnghwe who is the Executive Director of Euro-Burma Office (and son of Burma’s fist president – Sao Shwe Thaike) and Amir Ahmic, Liaison Officer at International Criminal Tribunal (Bosnia).

The speakers shared their experiences in dealing with genocidal crimes perpetrated against the Rohingyas and Bosnians (in former Yugoslavia). They called for ‘Protected Return to Protected Homeland’ for the Rohingya people. They highlighted the importance of providing formal education to the Rohingya children in refugee camps. They also raised the issues surrounding raped victims, their pregnancy and children, and that more international funding is necessary to address such issues immediately. The speakers also discussed the ‘Suu Kyi’ factor and how democracy went backward rather than moving forward under her de-factor leadership in Myanmar. She is a complicit to the genocidal crimes perpetrated by her security forces. They also urged concerned global citizens, esp. lawyers and legal experts, to file cases implicating members of the Myanmar government and military for their genocidal crimes against the Rohingya people. They also urged all to boycott Made-in-Myanmar products to create pressure on the criminal government of Myanmar to change its course so that the Rohingyas are integrated as equal citizens with all their rights preserved inside their ancestral homeland of Arakan.

The last session of the day was chaired by Dr. Graham Thom who has worked as Amnesty International Australia’s Refugee Coordinator since May 2000. Regina Paulose, J.D., an attorney specializing on International Criminal Law and Razia Sultana, a Rohingya lawyer who grew up as a refugee inside Bangladesh, and is the founder of Rohingya Women Welfare, joined via Skype, sharing their views on international law as these pertain to Myanmar’s genocidal crimes against the Rohingya people, esp. females.

Munira Subasic who had lost 22 family members in Srebrenica in July 1995 to Serbian genocidal criminals and was a primary eye-witness at The Hague International Court shared her insights about dealing with the pains of being a survivor to genocide, esp. the fact that while the Bosnian genocide stopped some two decades ago the Serbian criminals that killed his family members and raped so many women (and little girls) are still alive and continue to work and roam around unscathed within the Serbian territory of the new republic. She urged resoluteness in dealing with the Rohingya genocide and never to give up in demanding and to seeing justice carried out against the perpetrators of a genocide.

Beini Ye who works as the Legal Officer of Open Society Justice Initiative in the UK shared her expertise in legal matters dealing with the Rohingya genocide. She said that the Myanmar’s rapist military have been using rape as a weapon of war to terrorize the Rohingya community permanently. The ‘rapist’ military has had used similar tactics in its war against ethnic rebels in the border territories.

A lively questions and answers session followed each panel discussion. The conference ended with a note of solidarity with the Rohingya people and called upon the international community to stop the Rohingya genocide and to prosecute the criminals for perpetrating and/or inciting genocidal crimes against them.

The speakers and attendees thanked Hasene International and its organizers for their generosity in hosting this much-needed international conference in Germany.