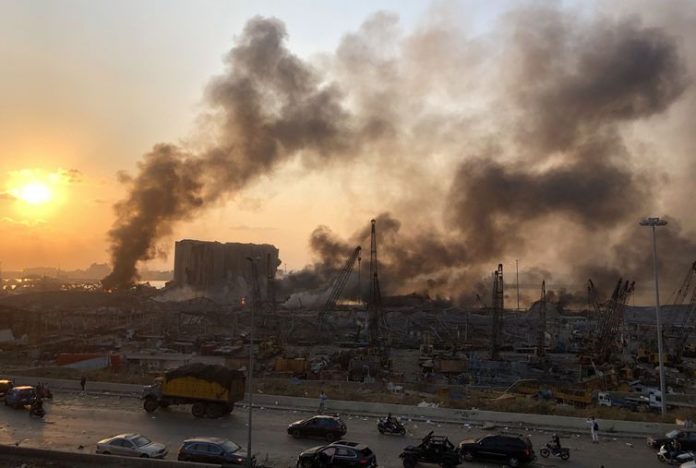 When I saw the scenes of French President Emmanuel Macron visiting the devastated areas of Beirut, I was filled with a number of conflicting emotions.

I was pleased that he went directly to the site of the explosions as a sign of deep respect for the suffering of the people and the city. I was furious that no one in the Lebanese government joined him. And I was amazed by the throngs of Lebanese who turned out thankful for his recognition of their pain and eager to demonstrate their contempt for their own failed leaders.

I was once again conflicted when Macron announced that France would be convening a donor conference to provide aid to Lebanon that would be conditioned on the implementation of real reforms. What he said was “I will propose a new political pact in Lebanon and I will be back September 1, and if they can’t do it, I’ll take my political responsibility.”

It made me both sad and angry that in the face of the massive corruption that has bilked billions of dollars from the country and the political dysfunction that has brought Lebanon to its knees, that it took this enormous tragedy and the French president to press hard on the reform issue. Hundreds of thousands of protesters in sustained demonstrations were not enough. COVID-19 wasn’t able to do it. Neither was the economic crisis that has left many Lebanese impoverished and in despair.

Through all these crippling challenges, the government dithered, the elites remained unmoved, and the armed groups, Hizbollah included, stood defiant against reform, “self-policing” their individual communities with the threat of force against protesters. Lebanon continued its slow march to death.

It is, therefore, upsetting that it is the arrogance of the French, who created and saddled Lebanon with its sectarian feudal regime, that is now demanding to “fix” the country. At the same time, I’ll admit a bit of relief that at last someone put down their foot and said “you must reform, or else.” But it was embarrassing relief, coupled with annoyance, that the ultimatum was left to the French to deliver, especially since that had been the very demand of the massive prolonged protest movement of the fall of 2019.

Last year, in the midst of the country-wide protests against corruption, I was honored by a Lebanese humanitarian organization. I began my remarks paraphrasing Kahlil Gibran’s poem “You have your Lebanon, I have my Lebanon.” Like Gibran, I love the Lebanese people, their poetry, art, song, and love of life. I love their generous and welcoming spirit. I also love what Lebanon has given to the world – especially its gifted people. And I love the sheer beauty of the country – its majestic snow-capped mountains and its pristine seascapes.

And, like Gibran, I do not love Lebanon’s petty bickering politicians who lead because of an accident of birth. Nor can I embrace the country’s system of sectarian privilege and the corruption that is endemic to the political-economic regime that has squeezed Lebanon dry to the benefit of their chosen ones. And I reject the armed militias, whether they be Christian, Muslim, or secular that in the past and in the present continue to torment those who challenge their dominance.

I told the audience that the Lebanon I loved was in the streets making their voices heard demanding fundamental reform – an end to sectarianism, corrupt feudal elites, and rule by force of arms.

In the wake of the protests, the government fell but was replaced by more of the same. The economy, already in shambles, went into free-fall. And still, the leadership could not make needed reforms. “How could they,” one might ask, “when they were the problem.”

Over the past few decades, I have polled in Lebanon and the results are instructive. Lebanese, of all sects, want “one man one vote.” They reject sectarian governance and the tyranny of militias. And they are wary of US and Iranian meddling in their internal affairs. In other words, they want to reform.

From everything I’ve heard since the explosions in the port, many Lebanese have crossed the line from frustration with their government to despair that change is possible. A collapsing economy, a loss of control over their domestic and foreign policies, a dysfunctional government that remains insensitive to their needs and aspirations, coupled with a pandemic and continuing refugee crisis that has strained limited resources, have left them still angry but despondent. I believe that was why they responded so hungrily to Macron’s presence at the scene of their newest hurt.

While France is an unlikely patron of change, Macron, therefore, was “singing to the choir.” But it should not be the French alone who should join the Lebanese people in demanding fundamental reform and restructuring of the system of governance. The planned donor conference should provide immediate assistance to aid those in need of support and combine it with a long-term package to rebuild – conditional on needed reforms. This will empower the popular movement in Lebanon and restore their hope that they have allies who will be by their side in the long road ahead to save, rebuild, and restore the country.

Make no mistake, the path forward won’t be easy. The sectarian elites will not just step aside, nor will Hizbollah simply agree to end their threat to use arms against those who demand change. But we’ve come to a crossroads. If the Lebanon we love is to be saved, then the Lebanon we do not love must be defeated. Either that or Lebanon may die.