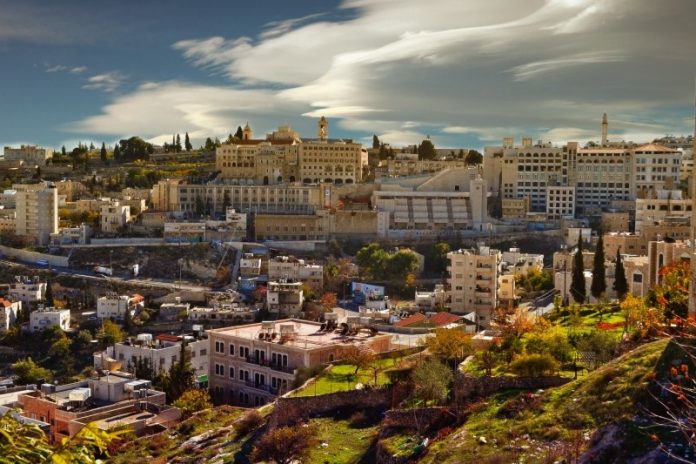 As we enter the final week before Christmas, my thoughts turn to Bethlehem, its struggling people, and the shocking disregard for them displayed by many Christians in the West. This is not to say that these same Christians don’t love Bethlehem. But the city they love is one of the stories that are two thousand years old.

In that story, we are told of how Mary and Joseph​, living under Roman occupation​, were required to travel to Bethlehem to enroll in a mandatory census. Because the town had become overcrowded, Mary and Joseph could not find housing and were forced to stay in a cave where Mary gave birth to Jesus.

The story has been romanticized in song and poetry that have come to define our understanding of that “quiet little town,” the manger where Jesus was placed, the angels, shepherds​, and “wise men from the East” who came to praise the birth and bring gifts to the newborn.

In all of this, the reality of contemporary Bethlehem is ignored​, as is the suffering of its people. Today, Bethlehem is surrounded by dozens of Israeli settlements, many built on land confiscated from Bethlehemites. It is cut off from much of the West Bank by two Israeli bypass roads and a massive concrete wall. And just this month​, Israeli Prime Minister Benjamin Netanyahu announced plans to advance a new settlement that​, when built​, will completely sever Bethlehem from nearby Jerusalem.

The resultant loss of land, the growing impoverishment of its citizens, and the hostile actions of Israeli occupation forces and settlers have forced many Bethlehemites to leave their beloved city and homeland. Given these accumulated violations of human rights and their impact on Christians and Muslims, alike, one might expect Christians in the West to speak out in defense of these residents of the little town they celebrate each year. That, sadly, is not to be – most especially (and I might add ironically) among powerful Christian conservative groups in the US which, after all, claim to be the defenders of their co-religionists worldwide.

To most in the West, Palestinian Christians are simply invisible. To conservative Christians​, they are at best a nuisance who stand in the way of their unquestioning ideological attachment to Israel.

I saw this up close during my four-year tenure as a Presidential appointee to the US Commission on International Religious Freedom. As a Lebanese Maronite Catholic, who had traveled throughout the Middle East, I was aware of the concerns of Christian communities in the region and I was excited to play a role in protecting their rights.

Despite having been charged by the White House to “push back” on the hold that conservatives had over the commission and its operations because I was the newest commissioner, I thought it best to spend months learning the ropes, before raising any concerns of my own. I learned early on that I wasn’t going to have the luxury of waiting.

In December of 2013, my third month on the commission, the staff circulated a draft opinion piece that was to be sent to newspapers under the authorship of the commission’s Chair and Vice-Chair. It began:

“As we enter the Christmas season, Christians look joyously ahead to celebrating Christ’s birth in a manger. But across parts of the Middle East, the cradle of Christianity, followers of Jesus are under siege and live in fear, facing a rising tide of repression, intimidation, and violence…Unless circumstances change, some are pondering the unthinkable: will Christianity survive in the area of its origin?”

The piece went on to devote full paragraphs to the plight of Christians in each of the following countries: Egypt, Iraq, Syria, Saudi Arabia, Iran, Nigeria, and Pakistan.

Soon my inbox began to fill with notes of approval from my colleagues on the commission. I had to act quickly before a majority approved and the article would be sent out. I, therefore, wrote in response:

“How on earth can we publish an article about the plight of Christians in the Holy Land without even a mention of the concerns of the Christians in Bethlehem…and Jerusalem, etc. They too are suffering – losing their lands and ability to survive under harsh occupation. The wall, the settlement construction on confiscated Bethlehem land, and the closure of Jerusalem are choking these cities and forcing their residents to leave.”

The response from some of my fellow commissioners was one of indignation. How dare I criticize Israel? Didn’t I know that Israel protects Christians and allows them to prosper? And didn’t I know that the problems facing Christians in the Holy Land are the result of Muslims?

After a number of further exchanges, they agreed to add a single disturbingly “no-fault” sentence:

“In Bethlehem, birthplace of Jesus, many Palestinian Christians, who are part of a small and diminishing minority, feel marginalized and insecure.”

This was not the last time I was to witness the gross insensitivity of my fellow commissioners to the plight of the Christians in Palestine.

The next year, I invited the Catholic Patriarch of Jerusalem to address the commission. He had come to Washington seeking help on a number of issues​, including stopping Israeli plans to confiscate church lands to build the barrier wall. The route for this section of the wall would separate a monastery from its vineyards and a convent and Christian children from their school. Not only did his appeal fall on deaf ears, but he and I were both shocked when two commissioners bizarrely upbraided him for not using his position to challenge Hamas!

The following year, my conservative fellow commissioners wanted to issue a statement denouncing UNESCO for honoring a Palestinian request to declare Bethlehem a World Historical Site. ​We were able to table this statement after a prolonged battle.

In my final year, the commission received two appeals: one from a liberal Jewish group and the other from the heads of all the Christian churches in the Holy Land – accompanied by a 192-page report compiled by a group of Palestinian lawyers arguing the case for why the commission should address Israel’s violations of the religious rights of Christians, Muslims, and non-Orthodox Jews.

When a liberal Jewish colleague and I introduced a motion to consider both the requests and the report, the reaction from our conservative Christian and Jewish colleagues was near hysteria. They had two major objections: Why were we singling Israel out for criticism? And didn’t we realize that if the commission were to act on this request it would lose its Congressional funding?

Deeming the latter challenge insulting, I focused only on the former and responded that we were not singling Israel out for criticism since we had in fact joined with our colleagues in challenging violations of religious freedom in dozens of countries worldwide. In fact, it was the conservatives on the commissions who were singling Israel as the one country that could never be criticized.

Our motion was defeated.

This shocking disregard for human rights and religious freedoms is what allows Israel’s behavior toward Palestinian Christians to continue. As a result, Bethlehem is being strangled and its people are in pain.

And this shameful silence continues. On this Christmas Day, the very conservative Christians who will sing of Bethlehem and tell the story of what happened in that city long ago will remain willfully blind to the current reality of that place and its people.