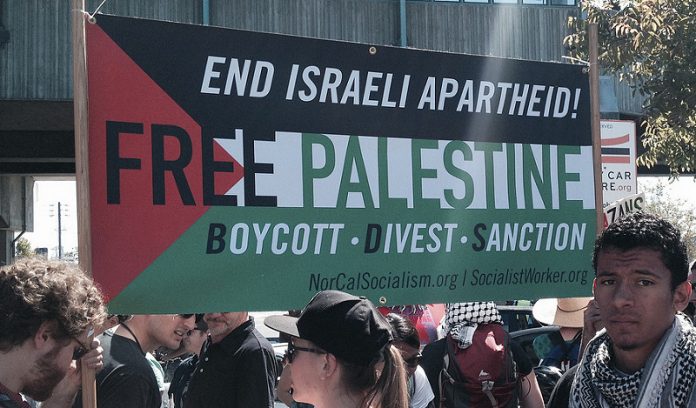 MY OPTIMISM about the future of Israel irritates a lot of people. How can I be an optimist in view of what’s happening here every day? The practical annexation of occupied territories? The mistreatment of the Arabs? The implantation of poisonous settlements?

But optimism is a state of mind. It does not falter in the face of evil. On the contrary, evil must be fought. And you cannot fight if you do not believe that you can win.

Some of my friends believe that the fight is already lost. That Israel can no longer be changed “from within”. That the only way to change it is by pressure from outside.

Fortunately, they believe, there is an outside force, that is ready and able to do our job for us.

It is called BDS – short for “Boycott, Divestment, Sanctions”.

ONE OF these friends is Ruchama Marton.

If anyone has the right to criticize and despair, it is she. Ruchama is a psychiatrist, the founder and now the honorary president of the Israeli association “Physicians for Human Rights”. A splendid outfit.

The physicians go every week to an Arab village and dispense medical help (for free) to all who need it. Even the Israeli authorities respect it, and often accede to their demand to allow sick people from the occupied territories into Israel for hospitalization.

When we celebrated Ruchama’s 80 birthday last week, she turned on me and accused me of fostering false hopes about the chance that present-day Israel will ever make peace and withdraw from the Palestinian territories. According to her, that chance has passed. What is left is the duty to support BDS.

BDS is a world-wide movement which propagates the total boycott of everything Israeli. It wants to convince corporations, and especially universities, to divest themselves of Israeli investments, and supports all kinds of sanctions against Israel.

In Israel, BDS is hated like the devil, if not more. You really need a lot of courage to stand up in Israel and support it publicly, as a few people do.

I promised Ruchama to provide an answer to her accusation. So here it is.

First of all, I have a profound moral objection to any argument that says that we can do nothing to save our own state, and that we must put our trust in foreigners to do our job.

Israel is our state. We are responsible for it. I belong to the few thousands who defended it on the battlefield when it was born. Now it is our duty to fight for it to become the state we wanted it to be.

First of all, I do not accept the belief that the battle is lost. No battle is lost as long as there are people who are ready to fight.

I BELIEVE in peace. Peace means agreement between two (or more) sides to live in peace. Israeli-Palestinian peace means that the State of Israel and the Palestinian national movement come to terms with each other.

Peace between Israel and Palestine presupposes that the State of Israel does exist, side by side with the State of Palestine. I am not quite

sure that this is the aim of the BDS movement. Much of what it does and says could lead to the conclusion that it wants a peace without Israel.

I believe that it is the duty of BDS to make this point absolutely clear. Peace with Israel or peace without Israel?

Some people believe that peace without the State of Israel is possible and desirable. Many of them subscribe to something called the “One-state Solution”. This implies that Israelis and Palestinians will live happily together in one common state, as equal citizens.

That is a nice dream, but, unfortunately, historical experience testifies against it. The Soviet Union, Yugoslavia, Czechoslovakia, Indochina and others have broken up, Belgium, Canada, the UK, and many others are in dire danger of breaking apart. At this very moment, genocide is being carried out in Burma under the auspices of a Nobel Peace Prize laureate.

Are two fiercely nationalistic peoples, who claim the same homeland and have been at war for almost 150 years, now going to live together peacefully in one joint state? Not likely. Life in such a state would be hell.

(An Israeli joke: “Can the wolf and the sheep live together? No problem! But one has to provide a new sheep every day.”)

PEOPLE WHO support BDS generally point to the experience of South Africa as the basis of their strategy.

The story goes like this: the black majority of South Africa were oppressed by the white minority. They turned to the enlightened (white) world, who proclaimed a world-wide boycott on the country. In the end the Whites gave in. Two wonderful men, Nelson Mandela and Frederick Willem de Klerk, fell into each others arms. Curtain.

The blacks, who constituted the vast majority in South Africa, started a campaign of strikes and violence. Mandela, too, was a terrorist. The world-wide boycott movement certainly helped, but it was the indigenous struggle that was decisive.

(Israeli leaders told their white South African friends to partition the country, but there were no takers on either side.)

Circumstances here are totally different. Israel does not need Arab workers, it can do well without. It imports laborers from all over the world. The living standard of Israelis is more than 20 times (!) higher than that of the Palestinians in the occupied territories. Both sides entertain a fierce nationalism. Because of the holocaust, the Jewish side enjoys the profound sympathy of the world. Anti-Semitism is out, and Israeli propaganda accuses BDS of being anti-Semitic.

In a moment of unusual wisdom, the United Nations decreed the partition of Palestine. In practice, there is no better solution.

IN PRINCIPLE, I am not against a boycott. Indeed, already in 1977, the Gush Shalom movement, to which I belong, was the first to proclaim a boycott of the settlements. We distributed many thousands of lists of the businesses operating there. As a result, quite a number of them were re-located to Israel proper. I can easily envision an even wider boycott of all enterprises which support the settlements.

But to my mind, a boycott of Israel proper is a mistake. It would drive all Israelis into the arms of the settlers, while our job is to isolate the settlers and separate them from ordinary Israelis.

THE PRESENT situation indicates that we have made mistakes. We must stop and think again, right from the beginning.

The organization founded by Ruchama Marton is not the only group doing its bit for peace and human rights. There are dozens of them, founded by splendid men and women, each active in its chosen niche. We need to find a way to combine their strengths without damaging their independence and special nature. We need to find a way to revitalize the political parties of the Left (the Labor Party, Meretz and the Arab United List) which are in a state of coma. Or form a new party.

I respect BDS and all their activists who are sincerely striving to liberate the Palestinians and make peace between them and us. The effort being made now in the US to enact a law forbidding their activity looks to me both ridiculous and anti-democratic.

Let them do their job over there. Our job here is to regroup, to reorganize and to redouble our efforts to overturn our present government and their allies and bring the forces of peace to power.

I believe that the majority of Jewish Israelis would want peace, if they thought peace possible. They are torn between an energetic right-wing minority, with a fascist edge, that declares peace both impossible and undesirable, and a weak and soft left-wing minority.

This is not a hopeless situation. The fight is far from over. We must do our job inside Israel, and let the outside forces do their job over there.

There is nothing to despair of but despair itself.