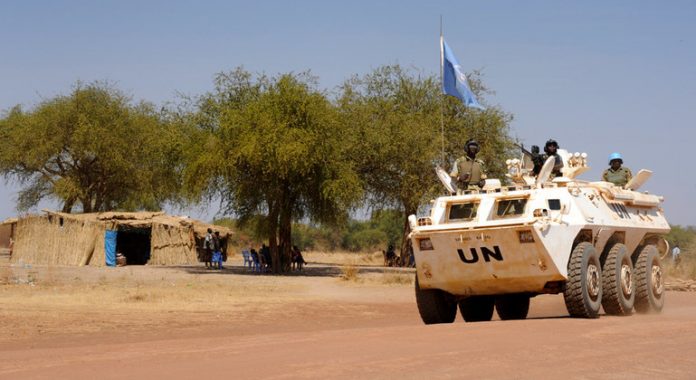 Jean-Pierre Lacroix, head of UN Peacekeeping, briefed ambassadors on recent developments concerning the oil-rich border area, where the UN interim security force, UNISFA, has been deployed since 2011 to protect civilians and humanitarians.

“The six-month reporting period was marked by continued rapprochement between the Sudan and South Sudan”, Mr. Lacroix said, noting however, that the rapprochement “did not translate into significant improvements on the ground”, where the security situation remains tense.

He also informed the Council members that there had been “modest progress” towards the benchmarks set out in Security Council resolution 2550, and that all requested aerial and ground monitoring missions were approved by the Governments of the Sudan and South Sudan in October last year. Most of them were conducted during the reporting period.

In addition, four of the ten closed border crossings had also been opened, including the El-Meiram-Aweil crossing – a major goods transit route, Mr. Lacroix said.

In one particular incident, on 30 December 2020, several shops and properties were destroyed at the Amiet market, and five Ngok Dinka and seven Misseriya were wounded. Similarly, on 15 February, three armed men, suspected to be Ngok Dinka, opened fire on a civilian vehicle outside Abyei town, severely wounding six civilians, who were brought to a UNISFA hospital for treatment.

Mr. Lacroix went on to note that the general security situation in Abyei area remained also volatile and unpredictable, with the most prevalent threats being shooting incidents as well as an increased presence of unidentified armed groups.

During the reporting period, some 47 security incidents were recorded, including 23 attacks on civilians that resulted in five fatalities and serious injuries.

A UN World Food Programme (WFP) humanitarian convoy, comprising 49 trucks, en route to Abyei town was held up by a Misseriya crowd, which demanded half of its cargo in return for passage. After two days of negotiations it was decided that the convoy would return to Khartoum, but 15 trucks were looted in the incident, Mr. Lacroix added.

Briefing alongside Mr. Lacroix, Parfait Onanga-Anyanga, UN Special Envoy for the Horn of Africa, also highlighted the impact of the coronavirus pandemic in the region, adding that the start of COVID-19 vaccinations – though limited at present – in both Sudan and South Sudan was a welcome development.

He also informed the Council of his trip to Sudan, as well as of wider regional dynamics, including the tensions between Governments of Ethiopia and Sudan over the Grand Ethiopia Renaissance Dam, which could have a “direct impact” on the configuration of UNISFA.

“I urge both Governments to reach a swift and peaceful resolution to these disputes. Such an outcome will have a positive impact on preserving UNISFA’s role in enhancing the security and stability of Abyei and the border area between Sudan and South Sudan”, Mr. Onanga-Anyanga added.