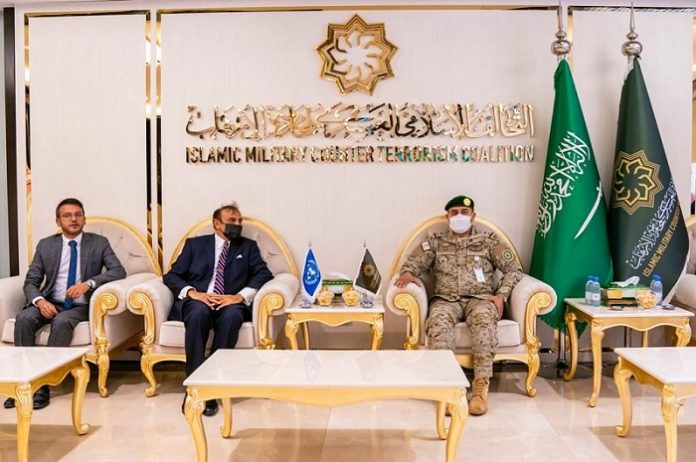 During the visit, Dr. Khan listened to a detailed explanation of the IMCTC’s efforts in combating terrorism in the four domains of action (Ideology, Communications, Combating Terrorist Financing, and Military), and its role in coordinating and intensifying the efforts of the coalition member states.

Al-Moghedi explained that the UNCCT represents an integrated system that seeks to enhance cooperation among its member countries. Based on values of legitimacy, independence, coordination and participation, the Coalition endeavors to ensure that all member countries’ counterterrorism actions and efforts conform to international regulations, norms and laws.

For his part, the UNCCT Director stressed the great role played by the Coalition in the various fields of combating terrorism, and the extent to which these trends are aligned with the premises on which the Center works to deter the scourge of terrorism and violent extremism.

He added that UNCCT does a lot of work with partners in the Middle East and North Africa (MENA) and contributes to developing strategies to support the MENA countries that suffer from terrorism, while looking forward to cooperation with IMCTC in the areas of combating terrorism.

Dr. Khan praised the efforts made by Saudi Arabia, the IMCTC’s founding country, in providing all facilities and resources to establish this coalition, as well as the financial and moral support provided by the Kingdom to UNCCT to coordinate, assist and support countries affected by terrorism.