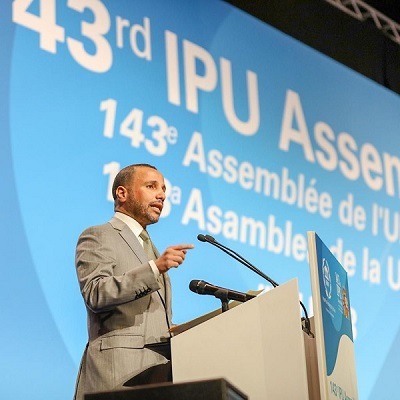 Madrid (UNA-OIC) – Speaker of Kuwait’s National Assembly Marzouq Ali Al-Ghanim has affirmed that criticism of some “erroneous practices in the democratic system and examining it regularly” is not aimed at undermining the governing regime, but rather safeguarding it.

Addressing the 143rd General Assembly of the Inter-Parliamentary Union (IPU) being held in Spain’s capital Madrid from 26 to 30 November, Al-Ghanim thanked organizers who have chosen the theme “Contemporary challenges to democracy: Overcoming division and building community” as the main topic for debates during this international gathering.

The Kuwaiti parliament speaker indicated that it is not sufficient to address or adopt democracy with superficial rhetorical discussions. “The matter warrants in-depth culture and intelligence,” he noted, also stressing other core issues in this respect, namely the practicing, the obstacles, the social, economic and cultural dimensions of the issue.

Al-Ghanim called upon his peers to put aside slogans and purported “sanctities” when addressing “this file”. Masking any ruling regime, even in the cases where it has a democratic form, is the number-one hindrance in the face of the approach to renew and remedy its drawbacks, he noted, emphasizing that “We should not be afraid when we point the finger at wrong practices; for democracy is a means, not an objective; it is rather a practice and not a slogan and we ought not to turn into slaves for political paganism or legal statute even if they carry a democratic name.”

The Kuwaiti official went on to say that democracy is not sacred and nothing should prohibit efforts to correct or guide it where the practices are not right. Meanwhile, he cautioned that democracy may encounter serious threats and challenges, where the society witnesses a sharp polarization with parties getting embroiled in irresponsible conflicts.

Moreover, in the shadow of this system, social media may turn into an arena for strife among intelligence agencies, ransom seekers and criminals, infested with rumors and misleading information intended to foment primitive and barbaric strife of sectarian nature.

Setting other examples of unsound phenomena under the wings of democracy, the parliament speaker mentioned the prevalence of the majorities at the expense of the rights of some communities, pointing out that in some countries malpractices jeopardize development.

Al-Ghanim urged the participant legislators to hold further and longer discussions and brainstorming debates to pinpoint issues and shortcomings that transpire under democracy. He expressed readiness to host at the Kuwaiti parliament headquarters seminars under the IPU aegis, to discuss the challenges facing democracy.