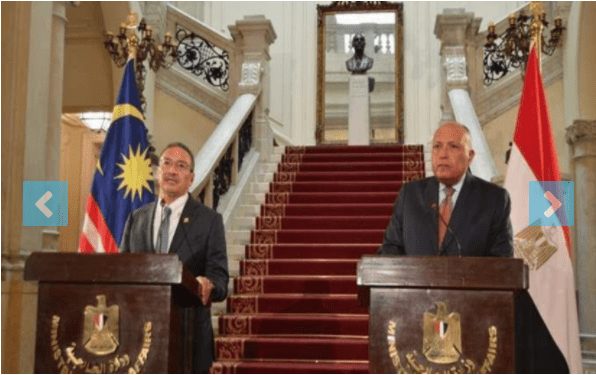 Kuala Lumpur (UNA-OIC) – Egypt and Malaysia will cooperate in channeling Malaysia’s humanitarian and medical assistance, including from non-governmental organizations (NGOs), to Palestinians in Gaza through the Rafah Border Crossing.

Malaysian Foreign Minister Hishammuddin Hussein said the matter was discussed with his Egyptian counterpart Sameh Shoukry in Cairo during his working visit to the North African country on Sunday.

“The way forward now is to provide unimpeded humanitarian assistance and focus on the reconstruction of Gaza,” Hishammuddin said in his remarks at a joint press conference with Shoukry.

He commended Egypt’s swift response towards the situation in Gaza, including the opening of the Rafah Border Crossing to transfer injured Palestinians for treatment at Egyptian hospitals; sending of humanitarian and medical assistance; as well as the initiative to reconstruct Gaza through a US$500 million allocation.

The Palestinian issue has been ongoing for over 70 years, but the recent 11-day attacks were different in the sense that it has sparked greater awareness and public opinion even in the United States and Europe.

“… we should use this opportunity to galvanize and ignite a new revival on Palestinian awareness to the world,” the Malaysian foreign minister added.

Hishammuddin also expressed Malaysia’s sincere appreciation towards Egypt for its leadership role, in particular, its critical role in brokering an immediate ceasefire agreement between Palestine and Israel in Gaza, which came into effect on May 21, 2021.

“The ceasefire is important in providing the much-needed respite from hostilities and violence against the Palestinians in Gaza, following aggressions by the Israeli Occupation Forces,” he said.

Hishammuddin Hussein arrived in Cairo on Sunday for a two-day working visit, which is his first trip to Egypt since taking over as the foreign minister in March 2020.