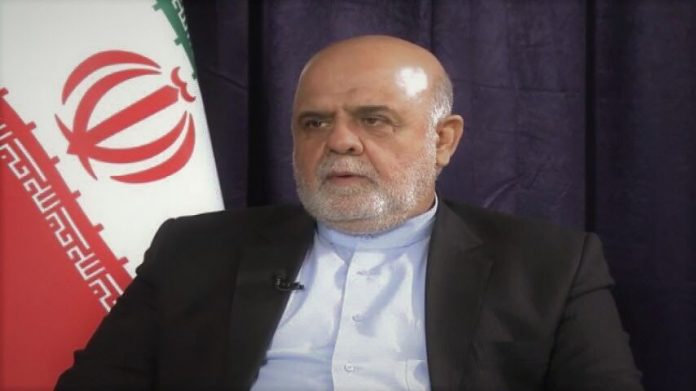 Speaking in an exclusive interview with Iraqi media ‘Al Iraqiya’, Masjedi said Iran’s approach toward the new Iraqi government is to develop cooperation and synergy, adding that Iran is ready to support new Iraqi PM and government.

He added that Iran and Iraq need each other and “our relations” will be wider during the new Iraqi prime minister’s term.

He referred to his meetings with Mustafa Al-Kadhimi and other Iraqi cabinet ministers on developing bilateral relations, saying there no major difference between the two countries.

Elaborating on Iran-Iraq economic relations, he said that good agreements were signed during the Iranian energy minister’s visit to Iraq.

Iran-Iraq trade relations depend on the situation in Iraq, he said, adding that economic relations between the two countries will continue.

Iran is also interested in importing Iraqi products, he reiterated.

In response to a question on the relations between Commander of the IRGC Quds Forces Brigadier General Esmail Ghaani’s trip to Iraq and Iraq-US strategic talks, he said Iranian Ghaani’s visit to Iraq is always at the official invitation of Iraqi officials and in line with reinforcing relations.

Iran’s policy is to expel US forces not only from Iraq but also from the region.

Commenting on Iran-US problems, he said these issues have nothing to do with Iraq.

We will never accept the US policies since they are based on disrespect, terrorism, pressure, and sanctions.

We will undoubtedly respond to US threats from anywhere, he said, adding that this is why we do not want other countries to be damaged by Iran-US disputes.

US bases in the region are the cause of problems, he said, adding that we will respond to the US threats and “we are against US’ presence in the region.

The US interferes in regional countries’ internal affairs and supports terrorism.

Masjedi advised all countries to establish relations with Iran based on their interests, saying US sanctions against Iran are not UNSC sanctions.

Iran is after maintaining constructive and friendly relations with all Arab and world countries, he said.

Iran only considers the Zionist regime of Israel as an illegal government and the US as an interventionist and arrogant country.

The US misuses regional conditions, he said adding that we urge all regional countries to offer the hand of friendship toward Iran.

We support Yemen and believe that Saudis should not bombard Yemen.

Islamic countries should have friendly ties with Iran since Iran has no animosity with them, Masjedi reiterated

Iran is not after the war with the US and will not negotiate with Americans, he noted.

For much of the interview, Iranian envoy pointed to visa waiver between Iran and Iraq, saying we have reached an agreement with Iraqi friends to issue a free visa.

Due to the outbreak of coronavirus, the agreement has been canceled but if the Iraqi officials agree “we will lift visa completely”.