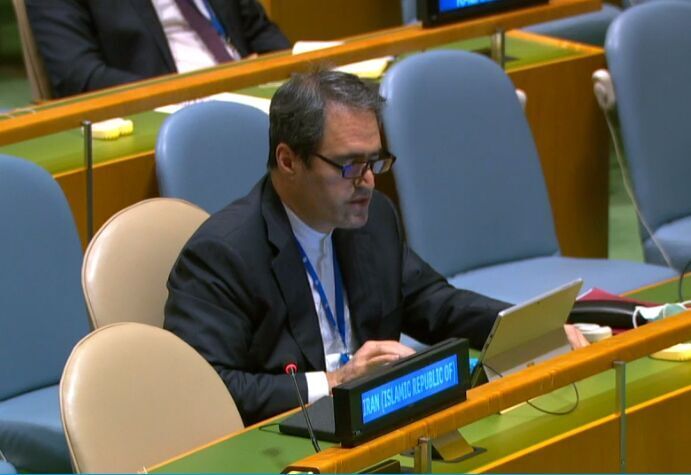 “I would like to take the floor to remind some delegations, including the UK and France who referred to Iran’s missile program in their statements. In a brief response, I would like to reiterate that Iran has developed, based on international law, its home-grown defensive missile capability to deter any threat against our country,” Baloji said addressing the UNGA First Committee meeting.

“And with regard to the JCPOA, I should highlight that this agreement is not a one-way commitment only accepted by Iran, rather it specifies individual commitments to its other participants, including the EU3, and we believe that instead of putting pressure on Iran they themselves should implement their obligations and also to have the USA stop violation of the Resolution 2231 and JCPOA and avoid imposing illegal maximal sanctions on Iran, he added.

The full text of the statement is as follows:

My delegation rejects the baseless allegations that the representative of the Zionist regime of Israel mentioned about Iran.

In fact, Israel is an entity that continues to impose institutionalized discrimination against Palestinians living under its rule and the Occupied Palestinian Territories (OPT). Israeli forces are killing Palestinians even without posing any threat to Israelis. Israel failed to ensure accountability and redress for victims of such grave violations of international humanitarian and human rights law and so it is subjecting Palestinians to collective punishment and deepening the humanitarian crisis there. It continues to restrict freedom of movement of Palestinians in the OPT through checkpoints and roadblocks. Israeli authorities unlawfully detain thousands of Palestinians, holding hundreds in administrative detention. Torture and other ill-treatment of detainees, including children, were committed with impunity. Israel continues to displace Palestinians in as a result of home demolitions. The authorities used a range of measures to target human rights defenders, journalists and others who criticized Israel’s continuing occupation of Palestine and other neighboring countries.

On human rights, the statistics are speaking for themselves and for instance, just in one year, at the United Nations Human Rights Council, Israel has been the focus of 70% of approximately 50 condemnatory resolutions by the council, 60% of the ten Special Sessions of the council and 100% of the council’s five fact-finding missions or inquiries. It is worth mentioning that comparisons between apartheid or Nazi regimes and Israel are increasingly made.

In addition, Israel is possessor of all types of weapons of mass destruction. Its nuclear capabilities have been acknowledged in different occasions. In 2006, then Israeli Prime Minister appeared to acknowledge that Israel had nuclear weapons. When its prime minister in 2018 threatened Iran with nuclear annihilation, it is another case which should be coped with by the international community for obvious reasons.

Israel has undeclared chemical warfare capabilities, and an offensive biological warfare program although it continues to deny these capabilities while rejecting all international calls to put aside the WMD option and abide by the rules that the responsible states have been recognizing and implementing.

Thus, Israel has no stand to cry wolf on non-proliferation or non-compliance and it must stop lying and accusing other countries, because Israel itself is the number-one violator of international law in the field of human rights, international humanitarian law, and all disarmament instruments. Specially on WMD regimes, it must join the NPT, BWC and CWC and destroy all its WMD arsenals while accepting the related verification regimes. The international community should compel Israeli regime to put aside any pretext to join the negotiations on establishing a Middle East free of all WMDs under the UN and participate in the discussions and the conference thereof.