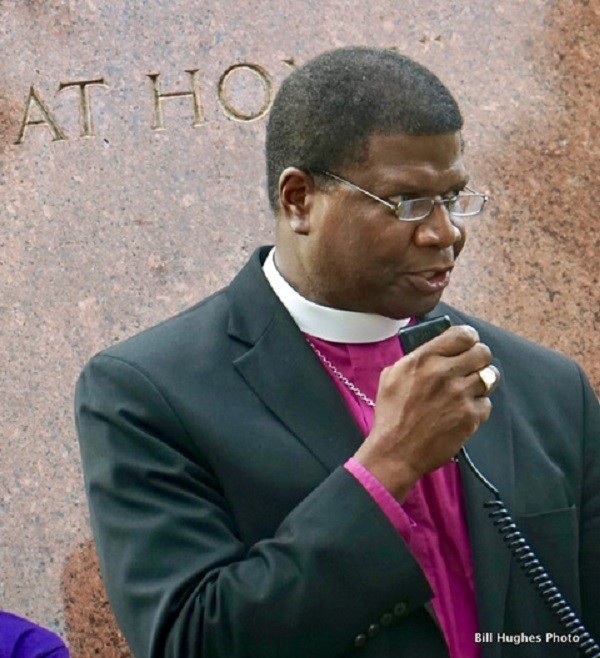 A spirited rally was held on the afternoon of September 13, 2017, in Bishop’s Park, Baltimore, Maryland. A crowd of about 150 were present. The park is located at the corner of University Parkway and North Charles Street, near the Johns Hopkins University.

The purpose of the event was to support the cause of the “DREAMers.” They are the 800,000 young undocumented immigrants in the U.S. who are now at risk of deportation. The program is known as “The Deferred Action for Childhood Arrivals,” (DACA).

Recently, President Donald Trump decided to end the DACA program. Then, instead, he passed the buck on the issue onto the U.S. Congress, which has a Republican majority.

The rally was sponsored by the Episcopal Cathedral of the Incarnation. One of the speakers was Bishop Eugene Taylor Sutton of the Diocese of Maryland.

The Bishop, an African-American, traced his family’s history back to the days prior to the founding of the American Republic. He said his “forebears were brought to this country in 1619, to Jamestown, VA. The first peoples enslaved in America. We had no choice about coming here, they wanted our labor. We were treated as slaves. We were property.”

The Bishop was standing in front of a pedestal that had recently held a large monument – a tribute to the lost cause of the Confederacy. It was taken down a few weeks ago on the orders of Baltimore’s Mayor, Catherine Pugh.

The Bishop added that the Confederates fought for an idea of America that was contrary to the “vision of God.” These so-called Christian people used their tradition and their scriptures “to subjugate another people.”

The Bishop said he would like to see a new monument in the park that “is for everyone.” He said America seems to be saying to the “DREAMers” we want “your labor but we don’t want you.”

“Just as my forebears had to say ‘no’ for many of hundreds of years, we are standing with our brothers and sisters here, (the DREAMers), today and saying, “No. That is not going to happen.”

The Bishop said, “it’s time for a new America. An America that looks more like the people of God… What makes a difference is that you are a child of God.”

The fact that this rally had to be called, the Bishop continued, is “shameful” for America. “‘Send them back’ is never a defensible notion for people of faith. Send them back? Where did you come from?”

The Bishop went on the underscore that the Christian faith stands on “the side of the outsider, the aliens.” He quoted Jesus and both the Old and New Testaments to make his moral and spiritual point.

The Bishop said that we are still fighting against the kind of negative thinking, and belief system, of 150 years ago, that gave us the “Confederate monument” that once stood in Bishop’s Park.

After the rally, Bishop Sutton marched with the audience over to the Cathedral of the Incarnation, only one block away, where a “teach-in” on the issues was to be conducted.

There are 11,143 “DREAMers” in the state of Maryland. A recent study supported the argument that they are making an “important economic contribution to the state.”

At press time, the White House denied a deal had been made with the Democratic leadership to protect DACA with new legislation. Any agreement, it indicated, must include provisions for border security and funding the wall. Stay tuned on this issue.

To check out more photos on this rally, go to my Facebook page.