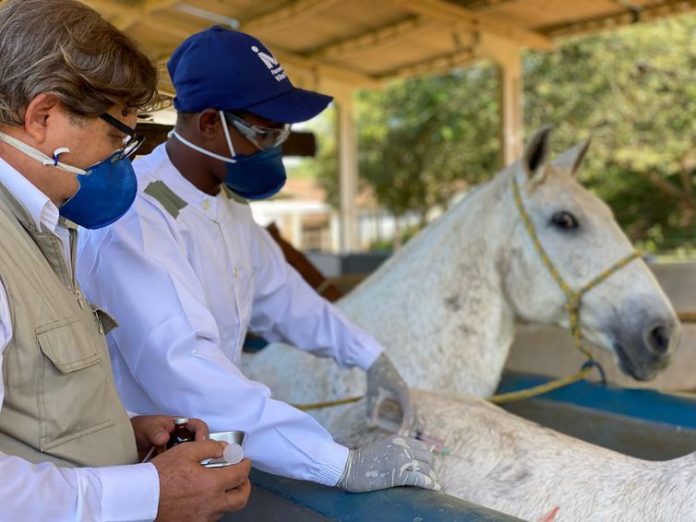 Studies initiated in May this year by Brazilian researchers from multiple scientific institutions have ascertained that the sera produced by horses for the treatment of COVID-19 have, in some cases, up to 100 times more power to neutralize antibodies of the virus causing the disease. The information was told to Agência Brasil by project coordinator Jerson Lima Silva, from the Medical Biochemistry Institute of the Federal University of Rio de Janeiro (UFRJ).

Lima Silva unveiled research results on Thursday (Aug. 13) at a COVID-19 symposium at the National Medicine Academy (ANM). At the occasion, he also announced the patent to guarantee Brazil’s technological process and the submission of the publication to MedRxiv, a repository for pre-print results. The scientist is also president of the Foundation for Research Support of Rio de Janeiro State (Faperj).

At first, the project aimed at obtaining purified gamma globulins, a biological material more elaborate than snake anti-venom or anti-tetanus serum. This serum is called hyperimmune or hyperimmune gamma globulins, because for three weeks researchers inoculate the antigen into the plasma of five horses at Instituto Vital Brazil (IVB), the official laboratory of the government of Rio de Janeiro.

The animals were inoculated with the coronavirus recombinant S protein, produced at the Alberto Luiz Coimbra Institute for Post-Graduate Studies and Engineering Research (Coppe/UFRJ). After 70 days, the horse plasma displayed neutralizing antibodies 20 to 100 times more powerful against the novel coronavirus than the plasma of convalescent COVID-19 patients, Jerson Lima Silva reported.

The positive results led to the patent request on the production of the anti-COVID-19 serum from the glycoprotein in the virus’s peplomer with all domains: antigen preparation, hyperimmunization of equines, production of hyperimmune plasma, production of the concentrate from specific antibodies, and the finalized product, after its purification through sterilizing filtration and clarification, packaging, and final formulation. The scientific enterprise came as a result of the partnership between UFRJ, IVB, Coppe/UFRJ, and the Oswaldo Cruz Foundation (Fiocruz). “We’re bringing together the expertise of a number of people.”

Jerson Lima Silva stated that the result of the inoculation of horses was a great surprise for researchers. “The animals gave us a remarkable response in their production of antibodies. After the inoculation of five, we’re expanding it to more horses.” Four of the five horses responded really quickly. “The fifth [animal], as is the case with humans, had a delayed response, but also responded by producing antibodies.” The horses at Instituto Vital Brazil are on a laboratory farm, in the municipality of Cachoeiras de Macacu, in the metropolitan region of Rio de Janeiro.

The studies demonstrated that the equine-produced serum is superior to those from the plasma of convalescent patients for the treatment of COVID-19. “We see that the horse’s antibody, in some cases, is nearly 100 times higher—from 40 to 100 times as high.” This means the antibodies produced by the animals neutralize the COVID-19 virus with up to 100 times more power, “even when we reach the final preparation of the sera.”

The project coordinator explained that another advantage of the study is that it comes to add to possible vaccines against the virus—most of which based on the protein in the peplomer. The idea is that the serum produced with the plasma of inoculated horses may be employed through immunotherapy, or passive immunization. The vaccine would therefore be complementary.

After approval by Brazil’s national sanitary watchdog Anvisa and the National Commission for Ethics in Research (Conep), the group of researchers will start the clinical trials, with a focus on patients diagnosed with COVID-19 but not in intensive care. The tests will compare those who received the treatment with those who did not. “We’re very optimistic. But this is a stage that cannot be overlooked,” Silva said.

He said he plans on striking partnerships with other similar laboratories producing serum in Brazil, in São Paulo, and Minas Gerais, for instance, “because a lot of material will be needed.”

The study indicates that, until vaccines are approved, and, faced with the difficulties in meeting the globe’s demand, the potential use of passive immunization through therapy with the serum should be considered an option. Serotherapy is a successful treatment, used for decades against diseases like rabies and tetanus, as well as stings of bees, snakes, and other venomous animals. The sera produced at IVB have shown excellent results in clinical use, with no history of hypersensitivity or any other possible adverse reactions. The clinical studies will be conducted in partnership with D’Or Institute of Research and Education (Idor).

The research is financially supported by Faperj, the National Council for Scientific and Technological Development (CNPq), the Coordination for the Improvement of Higher Education Personnel (Capes), and the Funding Authority for Studies and Projects (Finep).