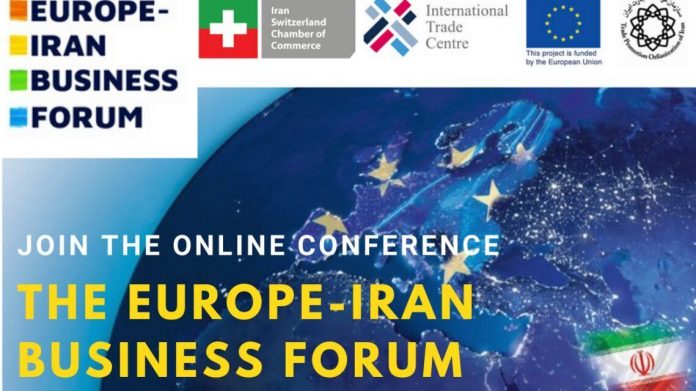 The three-day forum will be held by video conference with the collaboration of the Trade Promotion Organization of Iran, the European Union and the International ICT Center.

Economic activists, experts in economic affairs, and the press, who have registered in the event, will explore the latest paths of recovering and developing economic relations between Iran and Europe.

The themes to be covered in this forum include a new strategy for entering Iran’s goods and technical services to Europe, maintaining and expanding relations between financial markets and banks of Iran and Europe, supporting European companies interested in investing in Iran despite current US sanctions and in light of European obligations in the JCPOA, expansion of trading medicinal plants and auto components, Iran’s petrochemical products and IT services in Europe, Europe investment landscape in Iran and several other areas.

Mir Hadi Seyyedi, a senior official in Trade Promotion Organization, said that through this event, Iranian and European companies become familiar with each other and explore investment opportunities, as well as valuable ideas proper for investment.

During the event, some scholars from Iran and Europe will give educational lectures on 12 topics with the purpose of improving Iranian companies’ expertise and competence.

Middle Ease Director-General in The European House – Ambrosetti, Luca Miraglia, told IRNA that the forum is a real opportunity to improve trading capacity and expanding exports from Iran to Europe.

He also opined that “when it comes to the US sanctions, one may think no interaction is possible. But I say that our mission is to make Europe’s stance clear; one that has never changed since JCPOA was signed”.

According to reports, Iran’s foreign trade with Europe was more than 16 million tons worth near 67 million dollars.