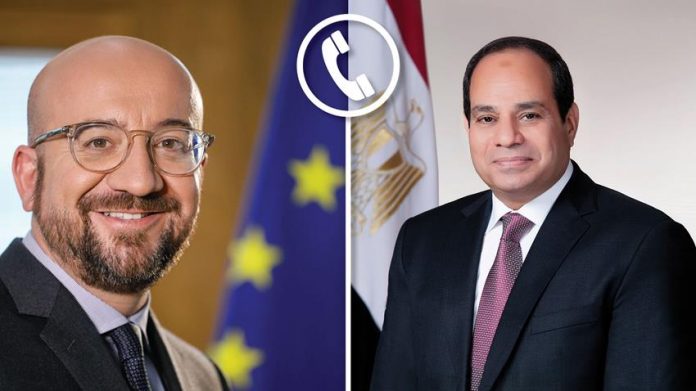 Cairo (UNA-OIC) – Egypt’s President Abdel Fattah El-Sisi on Wednesday received a phone call from President of the European Council Charles Michel, who expressed the EU’s appreciation of the successful Egyptian efforts leading to ceasefire and de-escalation in Gaza between the Palestinians and Israelis.

Egypt’s Presidential Spokesman Bassam Radi said in a statement, that the telephone conversation dealt with a number of issues of common interest between Egypt and the European Union, and ways to enhance relations between them, as well as coordination and exchange of views on regional issues.

The spokesman added that the two sides also discussed the developments of the Palestinian cause in the wake of the recent events; the situation in Libya; and the prospects for cooperation between the EU and Egypt in the areas of development in Africa.

On the developments in Libya, they agreed upon the importance of continuing bilateral coordination in this regard, with the view to supporting the ongoing transitional period until the December 24 elections.

With regard to Africa, Sisi and Michel focused on the importance of ensuring the EU’s continuous support to the African countries in facing the repercussions of the COVID-19 pandemic. They also emphasized the need to encourage large European companies to establish further investment projects in the continent.