EU’s European Security and Defence Union published an interview with Bakhtiyor Gulyamov, Chairman of the State Committee of Industrial Safety of the Republic of Uzbekistan and an article by Otabek Kasimov, Head of Inspectorate on Supervision of the Implementation of the Convention on Prohibition of Chemical and Bacteriological Weapons. 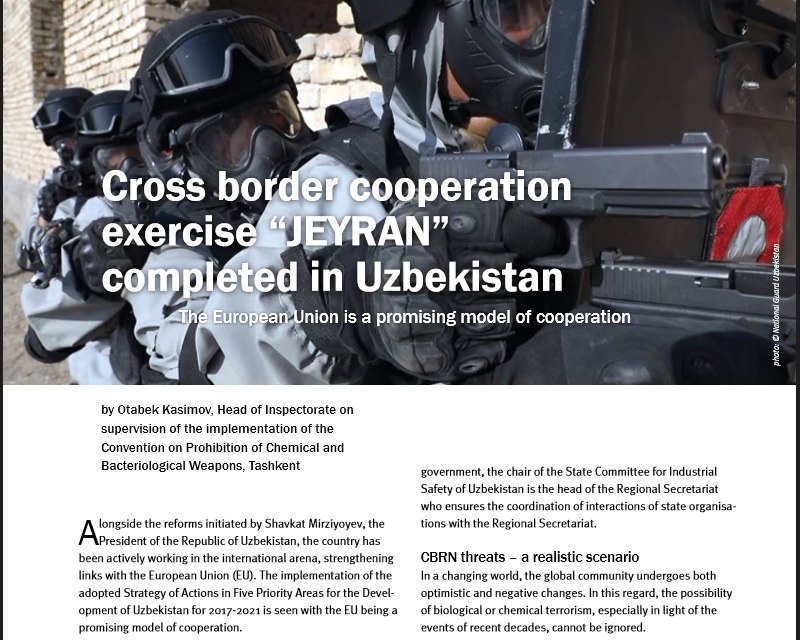 “Jeyran” exercise has become the most large-scale of those held on the territory of the training ground of the Institute of Civil Protection of the Ministry of Emergency Situations of the Republic of Uzbekistan. More than 250 fighters and specialists from law enforcement and specialized agencies, as well as international experts took part in them. 235 units of special equipment were used.

The plan of the exercise, developed by the organizing working group together with the European company ENCO (Poland), consisted of four logically connected parts. Thus, the interconnected response and coordinated actions of state structures in the event of terrorist threats with the use of chemical and biological agents were demonstrated. In particular, the possibilities of obtaining information on the import of hazardous substances into the country, procedures for detecting dangerous goods when crossing the state border and covert surveillance were studied. Methods of identifying clandestine laboratories with simultaneous creation and organization of the activities of the operational headquarters were considered. Experts worked out methods of seizing, examining and decontaminating laboratories, methods for identifying accomplices of attackers, procedures for preventing terrorist attacks in densely populated areas and neutralizing improvised explosive devices in the field. In addition, an attempt was simulated to prepare a terrorist attack in the cinema hall of a large shopping and entertainment center. A cordon was organized and people were evacuated. During the scenario of simulating a terrorist attack, experts found, processed, removed and defused a fake explosive device.

Moreover, all events were as close to real as possible. Therefore, all available forces and means were used, including robotics and specially trained dogs. Specialists from Afghanistan, Mongolia and Kyrgyzstan were involved in participation.

UN, EU, the SCO Regional Anti-Terrorist Structure representatives, as well as heads and coordinators of five regional secretariats of centers of excellence, specialists from 15 European, African and Asian countries observed the exercise.

According to the plan of the exercise, the coordination and sequence of actions of the Ministries of Internal Affairs, Emergency Situations and Health, the State Customs Committee, the National Guard, the State Security Service of the Republic of Uzbekistan were worked out in detail.

The most distinguished participants, who showed high professionalism and practical skills, were awarded prizes and certificates.

EU, Uzbekistan relations began to strengthen after the country gained independence in 1991. The basis for development of fruitful cooperation was the Partnership and Cooperation Agreement of 1996, which significantly expanded the bilateral interaction areas. EU and Uzbekistan carry out joint actions in trade, investment, intellectual property, human rights, culture and security.