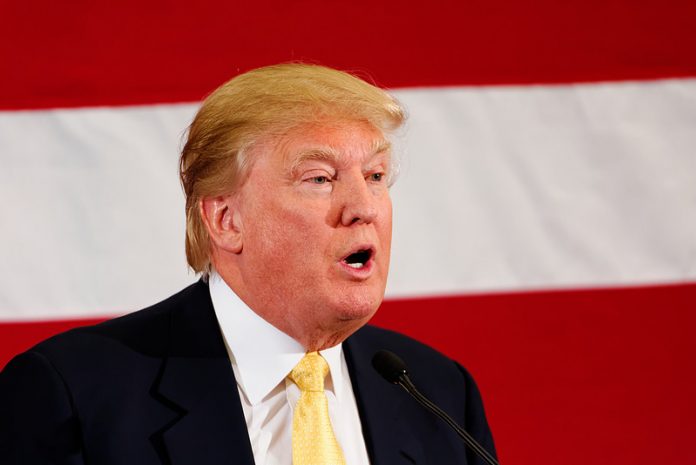 Twenty-Seven psychiatrists and mental health experts have produced a book called The Dangerous Case of Donald Trump, which I think, despite stating that the fate of the world is in the hands of an evil madman, understates the danger.

The case that these authors make is one that I believe would strike most readers not loyal to Trump as common sense. The evidence that they compile, and with which we’re mostly already familiar, strongly supports their diagnosis of Trump as hedonistic, narcissistic, bullying, dehumanizing, lying, misogynistic, paranoid, racist, self-aggrandizing, entitled, exploiting, empathy-impaired, unable to trust, free of guilt, manipulative, delusional, likely senile, and overtly sadistic. They also describe the tendency of some of these traits to grow ever worse through reinforcing cycles that seem to be underway. People, they suggest, who grow addicted to feeling special, and who indulge in paranoia can create circumstances for themselves that cause them to increase these tendencies.

As the Justice Department closes in on Trump, writes Gail Sheehy, “Trump’s survival instincts will propel him to a wag-the-dog war.” Of course, this builds in the assumptions that Trump stole the election and that we will all remain dogs, that we will start approving of Trump if he starts bombing more people. Certainly, this has been the U.S. corporate media’s approach thus far. But need it be ours? The Bulletin of Atomic Scientists disapproves and has moved the doomsday clock closer to zero. The Council on Foreign Relations has begun listing the United States as a top threat to the United States. A Congressional committee has held a hearing on the danger of a Trumpian nuclear war (even while feigning impotence to do anything about it). It’s not beyond the realm of imagination that the U.S. public could refuse to cheer for more mass murder.

In this regard, certainly, most past presidents have been more successful, not less, than Trump at what Robert J. Lifton calls the normalization of evil. He gives as an example the creation of the acceptance of torture. And certainly, we’ve moved from Bush Jr. secretly torturing to Obama refusing to prosecute to Trump publicly supporting torture. But many still deem torture unacceptable. Hence this book’s assumption that the reader will agree that torture is evil. But murder by bomb or drone missile has been so normalized, including by Barack “I’m really good at killing people” Obama, that it’s passed over by this book as simply normal. Lifton does refer to the normalization of a nuclear threat during the (previous) Cold War, but seems to believe that phenomenon to be a problem of the past rather than one so successfully normalized that people don’t see it anymore.

Most of the symptoms found in Trump have existed in various degrees and combinations in past presidents and in past and current Congress members. But some of the symptoms seem to serve only as icing. That is, alone they are deemed unobjectionable, but in combination with others, they point to severe sociopathy. Obama switched positions, lied, schemed, falsely marketed wars, revealed in the commission of murder, joked about using drone missiles on his daughter’s boyfriends, etc. But he spoke well, used a better vocabulary, avoided blatant racism, sexism, and personal bullying, didn’t seem to worship himself, didn’t brag about sexual assault, and so on.

My point, I very much wish it were needless to say, is not the equivalence of any president with another, but the normalization of illnesses in society as much as in individuals. This book goes after Trump for falsely claiming that Obama was spying on him. Yet the unconstitutional blanket surveillance of the NSA effectively means that Obama was indeed spying on everyone, including Trump. Sure, Trump was lying. Sure, Trump was paranoid. But if we avoid the larger reality, we’re lying too.

The symptoms from which Trump suffers may be taken as a guide to action by his followers, but they have long been understood to be an outline of the techniques of war propaganda. Dehumanization may be something Trump suffers from, but it’s also a necessary skill in persuading people to participate in war. Trump was given the presidential nomination by media outlets that asked primary candidates questions that included “Would you be willing to kill hundreds and thousands of innocent children?” Had a candidate said no, he or she would have been disqualified. The authors fault Trump for his joining the long list of presidents who have threatened to use nukes, but when Jeremy Corbyn said he wouldn’t use nukes, all hell broke loose in the UK, and his mental state was called into question there. Alzheimer’s may be a disease afflicting Trump, but when Bernie Sanders mentioned important bits of history like a coup in Iran in ’53, the television networks found something else to cover.

Is it possible that refusing to confront reality has been normalized so deeply that the authors join in it, or are required to by their agent or editor? Academic studies say the U.S. government is an oligarchy. These doctors say they want to defend the U.S. “democracy” from Trump. This book identifies Vladimir Putin as being essentially the same as Adolf Hitler, based on zero offered evidence, and treats Trump denials of colluding with Russia to steal an election as signs of dishonesty or delusion. But how do we explain most members of the Democratic Party believing in Russiagate without proof? How do we explain Iran being voted the biggest threat to peace in the world by Americans, while people in most countries, according to Gallup and Pew, give that honor to the United States? What are we to make of the vast majority of Americans claiming to “believe in” “God” and denying the existence of death? Isn’t climate denial child’s play beside that one, if we set aside the factor of normalization?

If a corporation or an empire or an athlete or a Hollywood action film were a person, it might be Donald Trump. But we all live in the world of corporations, empire, etc. We also apparently live in a world in which numerous men enjoy abusing women. That all these sexual harassers in the news, some of whom I am guessing are innocent but most of whom appear guilty, have convinced themselves that women don’t really mind the abuse can, I think, be only a small part of the explanation. The large part seems quite clearly to be that we live in a country of sadists. And shouldn’t they get a chance to elect someone who represents their point of view? Trump has been a public figure for decades, and most of his symptoms are nothing new, but he’s been protected and even rewarded throughout. Trump incites violence on Twitter, but Twitter will not disable Trump’s account. Congress is staring numerous documented impeachable offenses in the face, but chooses to look into only the one that lacks evidence but fuels war. The media, as noted, while remarkably improving on its enabling deference, still seems to give Trump the love he craves only when he brags about bombing people.

The U.S. Constitution is and has always been deeply flawed in many ways, but it did not intend to give any individual beyond-royal powers over the earth. I’ve always viewed the obsession with the emperor that this article I’m now writing feeds as part of the problem of transferring power to him. But the authors of The Dangerous Case are right that we have no choice but to focus on him now. All we’d need would be a Cuban Missile Crisis and our fate would be sealed. The Emperor Formerly Known As Executive should be given the powers of the British queen, not be replaced by an acceptable Democratic emperor. The first step should be using the Constitution.

Similar analyses of George W. Bush’s mental health, not to mention a laundry list of abuses and crimes, never resulted in any action against him. And despite this new book’s claim to defend “democracy” it does not use the word “impeachment.” Instead, it turns to the 25th Amendment which allows the president’s own subordinates to ask Congress to remove him from office. Perhaps because the likelihood of that happening is so extreme, and because further stalling and protecting of Trump is naturally a means of appearing “reasonable,” the authors propose a study be done (even though they’ve just written a book) and that it be done by Congress. But if Congress were to take up this matter, it could impeach Trump and remove him without asking permission of his cabinet or doing any investigations. In fact, it could impeach him for any of a number of the behaviors that are studied in this book.

The authors note that Trump has encouraged imitation of his outrages. We’ve seen that here in Charlottesville. They note that he’s also created the Trump Anxiety Disorder in those he frightens. I’m 100% on board with treating fear as a symptom to be cured.

Does Facebook’s Zuckerberg have a ‘Muslim’ problem?

UN and partners promote sport as a tool to prevent violent...