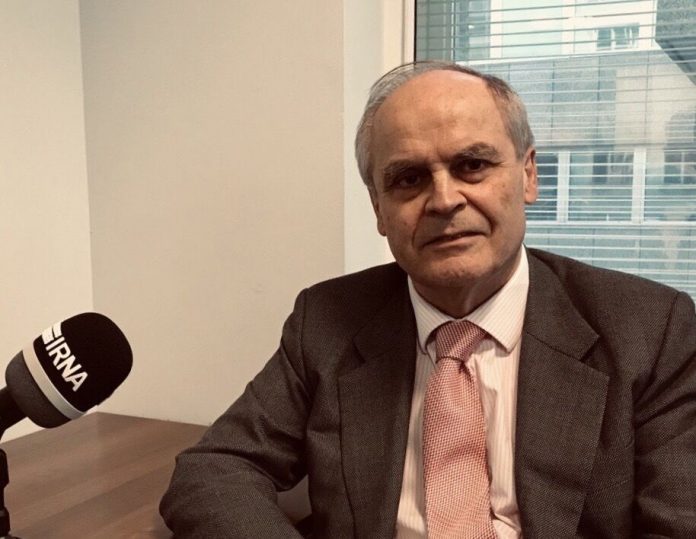 Speaking exclusively to IRNA, Jenkins discussed about his opinion regarding the recent developments of the Iranian nuclear deal, E3 proposed resolution on Iran that was adopted at the board of governors of the IAEA and the United Nation’s security council meeting regarding resolution 2231.

He admitted that Iran “has not been receiving the economic benefits that the other parties promised” in the JCPOA.

Jenkins stressed the E3 resolution proposed at the IAEA board of governors was unnecessary and added that Iran can find some way of having its concerns understood by the IAEA and the other JCPOA parties.

Asked about his opinion regarding the negative effect of US maximum pressure and sanctions against Iran to fight the pandemic, he said: “I am too remote from the marketplace to be able to judge the extent to which US sanctions are impeding humanitarian trade. My opinion, though, is that any impediment is unacceptable. To the extent, therefore, that US sanctions are impeding such trade, the United States is behaving unacceptably and should be roundly condemned by the E3 and the broader international community.”

Jenkins then added that it is beyond doubt that Iran has not been receiving the economic benefits that the other parties promised in JCPOA and therefore, it is natural that Iranians should regard the balance of the JCPOA as impaired.

However the British official indicated that it should not be concluded that the JCPOA no longer serves Iranian interests. The additional safeguarding enables Iran to reduce to a minimum the risk of other states perceiving Iranian nuclear activities as a threat to their security.

Reminded of his last remarks regarding the unlikeliness of US withdrawal from JCPOA, he said: I am pained by the reminder that I did not predict that President Trump would pull the United States out of the JCPOA. My mistake was to assume that a calculation of US interests would prevail over his urge to present himself as a better negotiator than President Obama. Withdrawing from the JCPOA has brought the United States no benefit and has lost the United States soft power.

Moreover, he added that it is not inevitable that the imbalance in the JCPOA will be lasting.

He indicated that if President Trump is defeated in November’s US presidential election, it is probable that the United States will re-join the JCPOA and lift many of the sanctions that are currently in force.

When questioned about E3 passivity to salvage the JCPOA, Jenkins said: It is my impression that the other parties understand why Iran has stepped away from full performance of its JCPOA commitments and therefore the other parties are clearly in no hurry to escalate the dispute over Iranian non-performance.

He then added that, I imagine that they would like Iran to reciprocate by refraining from taking any further steps away from full performance.

“To my mind, mutual patience is a wise policy in that a US presidential election is in the offing and Jenkins was asked, All evidences show that China and Russia will veto a resolution at the UNSC to extend Iran arms embargo. Why is the US still pursuing this route? Will it succeed?”

He replied, The United States cannot expect to secure adoption of a Security Council resolution extending the arms embargo in its current (resolution 2231) form, as this would be contrary to Russian and Chinese interests, and Russia and China enjoy veto powers.

He added that this must be apparent to US diplomats. It may be, therefore, that they are lobbying for a full extension in the hope of obtaining a partial extension. Even that, however, seems to me unlikely, as Russia and China will be mindful of an old diplomatic principle: past agreements should be honored (”pacta sunt servanda”). The parties to the JCPOA agreed a lifting of the 2231 embargo in October 2020. That agreement should be honored.

Asked about the necessity of E3 proposed resolution at the IAEA board of governors Jenkins said, “I do not understand why the E3 thought a resolution necessary. I think it would have been wiser for the E3 to respond to the IAEA Director General’s June report by encouraging Iran in their Board statements to extend to the IAEA the cooperation sought by the DG, and by lobbying other Board members to echo that encouragement in their statements.”

He added that these statements would have led the Board chairperson to include such encouragement in her summing-up of the discussion. To my mind this would have been a more appropriate response to the reported situation than a resolution.

The British official, however, did say that “Iran has over-reacted to the resolution.”

Jenkins also interpreted the recent communications between Iranian Foreign Minister Mohammad Javad Zarif and EU Foreign Policy Chief Josep Borrell over JCPOA, as evidence that Iran and the E3 remain committed to saving the JCPOA – or at least have no intention at this point of allowing their quarrel over the IAEA resolution to bring about its demise.

He cited Iran may be fearing that under the current US administration extending full cooperation to the IAEA may have unpredictable consequences. “If that is the case, perhaps Iran can find some way of having this understood by the IAEA and the other JCPOA parties. 3 November is less than four months away.”