Natalia Kanem, who concluded a mission to the African nation last week, commended the democratic transition underway, after the overthrow of longstanding leader, Omar Al-Bashir, in April 2019.

“Less than two years after the transition, remarkable progress has been made. We support progress to meet the aspirations of the people of Sudan”, Dr. Kanem said.

She also applauded the country’s women and young people as “powerful allies” and “agents of change” for democracy, peace and human rights for all.

According to UNFPA, Sudan has taken a number of steps to strengthen protection and promotion of human rights of women and girls, including adopting legislation that criminalizes female genital mutilation, repealing so called “morality laws” that restricted women’s freedom and movement, and enacting the first national standard operating procedures to prevent and respond to gender-based violence and establishing its first helpline.

While in Sudan, Dr. Kanem travelled to the Blue Nile state, which suffers from high rates of maternal mortality. She visited a maternity ward where UNFPA is supporting reproductive healthcare including fistula repair procedures, and interacted with midwives, and community leaders and members.

She also inaugurated a three-wheeled ambulance, called a tuk-tuk, to save lives of pregnant women about to give birth.

The tuk-tuk is the first of 42 that will soon be operating across Sudan, in an effort supported by the UN’s Central Emergency Response Fund (CERF) to strengthen access to life-saving services.

“When we hear that a family intends to cut their daughters, we pack our coffee cups and go talk to them”, Mama Igbal said.

Thanks to the tireless efforts by Mama Igbal – who herself suffered the traumas of cutting – and her Association, Tuti Island declared zero tolerance against FGM in 2011.

While in country, Executive Director Kanem also met with senior Government officials including Prime Minister Abdalla Hamdock, as well as national and international NGOs, members of the international community, UN agencies and partners.

Dr. Kanem also met with a team dedicated to the protection of women and girls from sexual exploitation and abuse, and sexual harassment, and discussed priorities, accountability and efforts to make zero tolerance a reality. 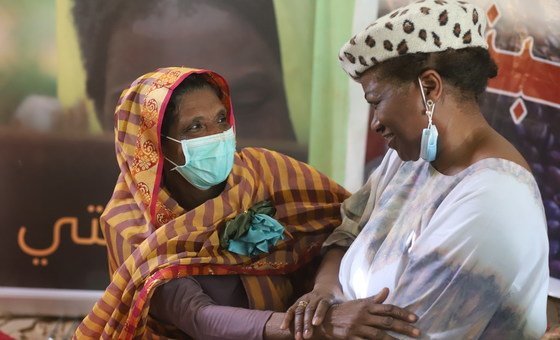 While the political transition in Sudan is moving forward, the country also faces pressing humanitarian challenges compounded by the impact of COVID-19, natural disasters, localized conflict and disease outbreaks.

According to the UN Office for Coordination of Humanitarian Affairs (OCHA), about 13.4 million people – of whom 7.6 million are women and girls – are projected to need humanitarian assistance this year. The influx of refugees, fleeing Ethiopia’s Tigray region, into eastern Sudan also continues, placing addition pressure on limited healthcare services and other facilities in those regions.

Against this backdrop, UN and humanitarian partners launched a $1.9 billion humanitarian plan to provide life-saving assistance to the most vulnerable. UNFPA estimates that over $50 million is required to provide reproductive healthcare and women’s protection services through the end of 2021.