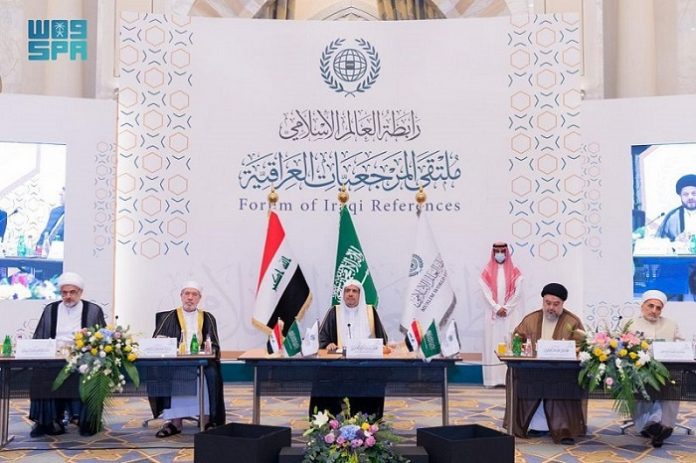 Makkah (UNA-OIC) – Makkah on Wednesday hosted, in the vicinity of the Grand Mosque, a historic forum that brought together all the influential Iraqi religious leaders and Islamic scholars for the first time.

The Forum of Iraqi References was held in response to the invitation of Secretary-General of the Muslim World League (MWL) and Chairman of the Association of Muslim Scholars Sheikh Dr. Mohammed bin Abdulkarim Al-Issa, in an effort to emphasize the togetherness and the unified position in rejecting the rhetoric of sectarianism, hatred and clash.

The participants adopted at the end of the forum a final communiqué, in which they expressed their gratitude and appreciation to Custodian of the Two Holy Mosques King Salman and Crown Prince Mohammed bin Salman, for their distinguished efforts and support for initiatives to promote peaceful coexistence and civilized dialogue, as well as to confront extremism and violence worldwide, in general, and in Iraq, in particular. They also expressed their thanks and gratitude to the MWL Secretary-General for this generous initiative that was highly appreciated by all Iraqi religious scholars.

The communiqué stressed the need to activate the Makkah Document, and to open channels of constructive dialogue and positive communication between scholars to address emerging issues and renewed crises while reiterating that this forum would be a nucleus for adopting these channels.

The participants called for the dissemination of the common values brought by Sharia to build the homeland and achieve citizenship by spreading the spirit of tolerance, peaceful coexistence, mutual respect, moderation, and rejecting extremism and hyperbole.

The scholars stressed that the priority in the religious and media discourse is to emphasize the word of monotheism and the unity, preserving the identity of the homeland and keenness on building it, besides rejecting terrorism and condemning violence in all its forms, in addition to paying attention to the peace jurisprudence to contribute to building a righteous society based on coexistence and societal peace.

They also called for the rationalization of religious fatwas (edicts) in order to achieve the purposes of legislation in preserving the five necessities for the human being (Religion, Life, Regeneration, Money and Brain), whether at the level of the individual or society, in a way that preserves the Islamic and human commonalities.

The communiqué recommended the establishment of a body for cultural communication between the sects and schools of thought that make up Islamic societies. It also mooted setting up a joint coordinating committee that brings together the Iraqi religious references and MWL, to follow up the initiatives resulting from the forum and activate any upcoming initiatives and coordinate among them as well as the events and activities that follow to achieve the set goals of the forum.

In his inaugural speech, Sheikh Al-Issa said: “Between Sunnis and Shiites, there is nothing but ideal fraternal understanding and coexistence, and cooperation and integration in the context of sincere compassion, while understanding the specificity of each sect within the same religion.”

The MWL chief also noted that Sunnis and Shiites embrace the characteristics of various schools of thought in the circle of their religion, except for one thing – the abhorrent sectarianism rejected by everyone. He urged the scholars to be wary of this disaster. Meanwhile, he praised the tireless efforts of the Iraqi government in the prosperity of the country and reinforcement of the comprehensive concept of national identity in the Iraqi conscience.

For his part, Minister of Endowments and Religious Affairs in Iraq’s Kurdistan Region Dr. Pshtiwan Sadiq Abdullah stressed that the Kurdistan government has spared no effort in building the new progressive federal Iraq, and has contributed to drafting the constitution that guarantees the rights of all components in the country.