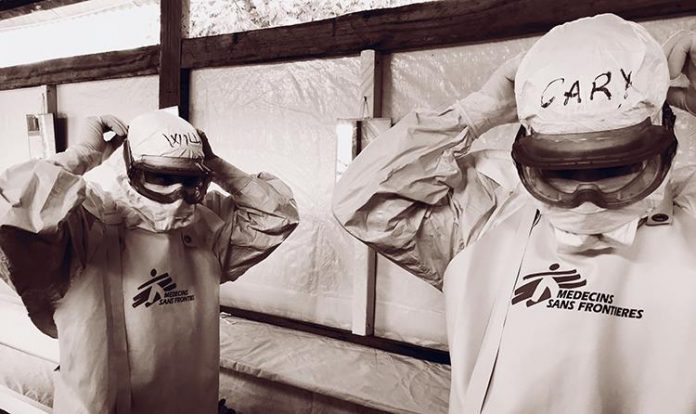 Emergency Committee for Ebola virus disease in the Democratic Republic of the Congo (provinces of Ituri, North Kivu, and South Kivu) on 26 June 2020

The 8th meeting of the Emergency Committee, convened by the WHO Director-General under the International Health Regulations (IHR) (2005) to review the Ebola virus disease (EVD) outbreak in the Ituri, North Kivu, and South Kivu provinces of the Democratic Republic of the Congo (DRC), took place on Friday, 26 June 2020, from 13:00 to 15:50 Geneva time (CEST). The Committee’s role is to give advice to the Director-General, who makes the final decision on the determination of a Public Health Emergency of International Concern (PHEIC) and issues Temporary Recommendations as appropriate.

Proceedings of the meeting

Members and advisors of the Emergency Committee were convened by teleconference.

Representatives of WHO’s legal department and the department of compliance, risk management, and ethics briefed the Committee members on their roles and responsibilities. Committee members were reminded of their duty of confidentiality and their responsibility to disclose personal, financial, or professional connections that might be seen to constitute a conflict of interest. Each member who was present was surveyed and no conflicts of interest were judged to be relevant to the meeting.

The meeting was turned over to the Chair, Dr Preben Aavitsland. Dr Aavitsland also welcomed the Committee, outlined the objectives of the meeting, and introduced the presenters.

Presentations were made by a representative of the Ministry of Health of the DRC and the WHO Secretariat to update the Committee on the situation.

The DRC Ministry of Health provided an update of the epidemiological situation. As of 23 June 2020, a total of 3 470 EVD cases were reported from 29 health zones, including 3 317 confirmed and 153 probable cases, of which 2 287 cases died (CFR 66%). Since the last reported case on 27 April 2020, no new confirmed or probable cases of EVD have been reported. On 25 June 2020, the DRC Ministry of Health declared that human-to-human transmission of Ebola virus had ended in Ituri, North Kivu, and South Kivu provinces. The Ministry of Health of DRC notes that a separate EVD outbreak is occurring in the Equateur Province, not epidemiologically related to the outbreak in the Ituri, North Kivu, and South Kivu provinces.

The WHO Secretariat presented the WHO risk assessment and context. Based on the evolution of the outbreak, current epidemiology, and response in Ituri, North Kivu, and South Kivu provinces, the overall national and regional risk levels remain moderate. The global risk level remains low.

Remaining challenges include the need for continued human and financial resources to maintain prevention, preparedness, response and control activities, such as the EVD survivor care programme; the volatile security situation; the new EVD outbreak in Equateur Province; and the concurrent burden of COVID-19, cholera, and measles.

Although the outbreak in Ituri, North Kivu, and South Kivu provinces has been officially declared over, the detection of a new EVD outbreak in Equateur Province highlights the potential for re-introduction from animal reservoirs. The DRC and at-risk countries need to maintain vigilance to mitigate the risk of EVD re-emergence as well as to rapidly detect and respond to any new cluster.

The Committee congratulated the Ministry of Health on the conclusion of the EVD outbreak in Ituri, North Kivu, and South Kivu provinces. The Committee conveyed their strong appreciation to the World Health Organization for their support in ending this challenging outbreak. The Committee also thanked the health workers, donors, and all partners who have supported the successful response and recognized the international collaboration and strong solidarity among DRC, neighbouring countries, WHO, and partners.

The Committee noted that the genetic sequencing has confirmed that the EVD outbreaks in the Ituri, North Kivu, and South Kivu provinces and the Equateur province are epidemiologically distinct events.

The Committee highlighted the importance of the 90-day national response plan which includes maintaining intensive surveillance, response capacity, and follow-up with EVD survivors. DRC and partners are engaging in all measures to reduce the potential for a resurgence in Ituri, North Kivu, and South Kivu provinces. The Committee noted the importance of the EVD survivor care programme and continued RCCE activities, which will continue to be conducted by locally trained staff in each province with support from national staff as needed.

The Committee expressed concern over the lack of prioritized resources to operationalize the 90-day national response plan and maintain long-term local capacity for prevention and response. Financial and human resources of DRC, WHO, and partners are challenged by the concurrent COVID-19, cholera, and measles outbreaks. The Committee encouraged DRC, WHO, and partners to harmonize EVD, cholera, measles, and COVID-19 prevention and control activities.

The Committee agreed that the current situation in the Ituri, North Kivu, and South Kivu provinces no longer constitutes a public health emergency of international concern.

The Committee emphasized the importance of continued donors’ funding and human resources to operationalize the 90-day day national response plan.

The Committee provided the following advice to the Director-General for his issuance as revised Temporary Recommendations under the IHR (2005).

Based on this advice, the report made by the affected State Party and the currently available information, the Director-General accepted the Committee’s assessment and on 26 June 2020 declared the end of the Public Health Emergency of International Concern (PHEIC) for this event.