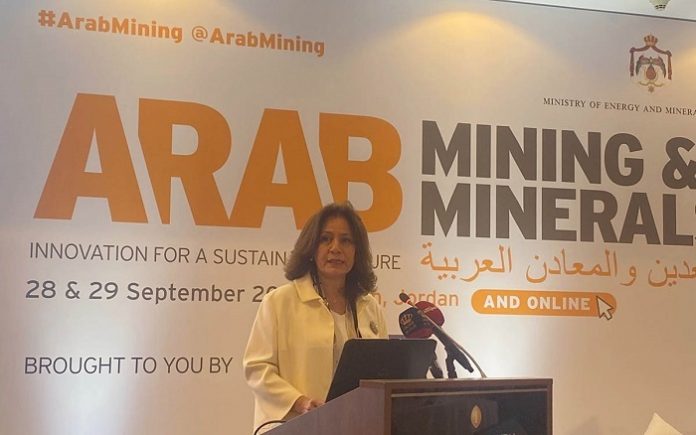 Amman (UNA-OIC) – The fourth International Edition of the Arab Mining and Minerals Conference kicked off Tuesday, showcasing the outstanding mining and materials potential in the Middle East and North Africa.

In remarks during the opening ceremony, Minister of Energy and Mineral Resources Hala Zawati said that Jordan’s subsequent governments have been sincere efforts towards achieving innovation capacity for long-term sustainable development. She stressed that mining needs the use of novel technologies to support the world’s Sustainable Development Goals (SDGs).

“Most countries realize the urgent need to consider alternative and innovative development processes for mining, along with alternative energy-producing sources, which will reduce dependence on fossil fuels in order to manage climate change risks, global warming, wildfires, floods and many other natural disasters,” Zawati added.

The minister indicated that the coming annual UN Climate Change Conference (COP26) will gather heads of state, climate experts and campaigners to agree on a coordinated action to tackle climate change. She stated that policymakers will place attention on the wellbeing of the planet and of people, which means cutting fossil fuels, reducing air pollution and improving health worldwide.

Zawati also pointed to the importance of silica for solar panels, and the need for copper, nickel, lithium and rare-earth elements in the manufacture of energy storage equipment and batteries, saying “mining will help us reduce the carbon footprint of fossil fuels”.

As for the mining industry in Jordan, the minister said that the sector’s contribution to the gross domestic product (GDP) ranges around 7.6 percent, with about 19 percent of the Kingdom’s exports as one of the largest producers and exporters of phosphate, potash, bromine, fertilizers and chemical acids in the world.

“In addition, the Dead Sea region and its environs provide distinctive opportunities for investment in mining industries, along with many other locations that are rich with strategic minerals such as copper, gold, zircon, rare-earth elements, and a group of industrial rocks like basalt, pure limestone, dolomite, silica sand and zeolite,” she added.

Held in London over the past few years, the two-day meeting is returning to the Arab region, bringing together regional mining companies, government decision-makers, mining-focused investors, and expert service providers, interested in truly the last mining frontier from Jordan, Iraq, Mauritania, the United Arab Emirates, the United Kingdom, the United States, France and Australia.