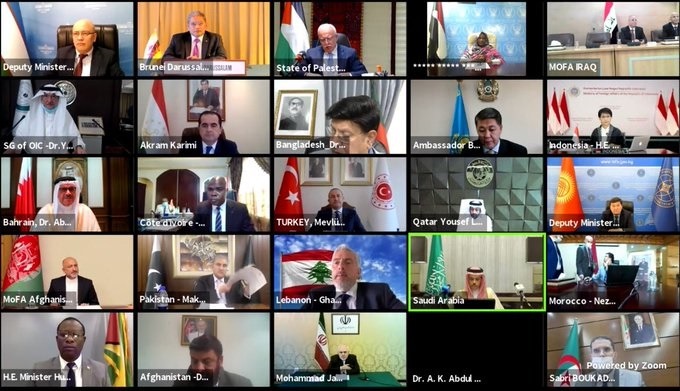 Jeddah (UNA-OIC) – The virtual open-ended extraordinary meeting of the OIC Executive Committee at the level of foreign minister held on 16 May, upon the request of the Kingdom of Saudi Arabia, Chair of the Islamic Summit, to discuss the aggression by Israel, the occupying Power in the Palestinian territories, particularly, Al-Quds Al-Sharif (Jerusalem).

Proceeding from the principles and objectives of the charter of the Organization of Islamic Cooperation,

Pursuant to the resolutions adopted by the ordinary and extraordinary sessions of the Islamic Summit and the Council of Foreign Ministers,

Driven by the historical, moral and legal responsibility of the Islamic Ummah towards the cause of Palestine and Al-Quds Al-Sharif,

Having reviewed the latest developments in the Occupied Palestinian Territories, including East Jerusalem, in particular the escalating aggression by the occupation forces and the extremist Israeli settlers in the Al-Aqsa Mosque/Al-Haram Al-Sharif, the forced eviction of Palestinian families from their homes in East Jerusalem, the killing and maiming of civilians, the growing barbaric attack on the Gaza Strip, giving free rein to all means of lethal military aggression against defenseless Palestinian civilians, which has killed and injured hundreds and caused widespread destruction of civilian properties and extensive suffering, constituting direct threat to international peace and security,