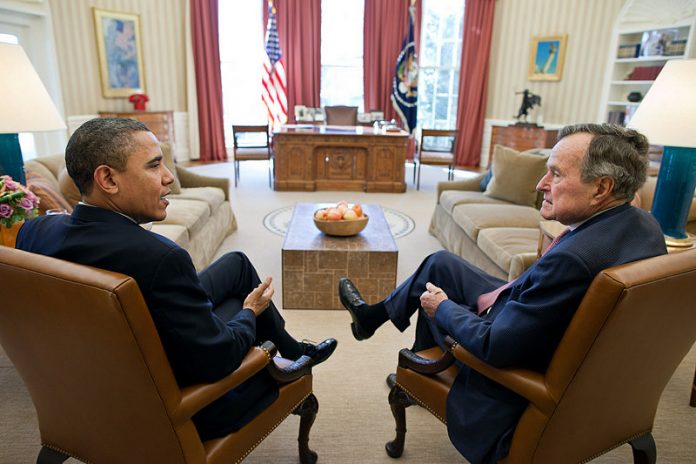 Former U.S. President George Herbert Walker Bush died late Friday on November 30, 2018, in his home in Houston. He was 94. He was suffering from a form of Parkinson’s disease. His wife of more than 70 years, Barbara Bush, died in April 2018. [They were the longest-married presidential couple in U.S. history.]

Sr. Bush, as he is also fondly remembered here in the USA, was an accomplished man in so many ways. The son of a senator and father of a president (the 43rd President George W. Bush), H. W. Bush was the man with one of the most impressive resumes. He was born June 12, 1924, in Milton, Massachusetts, into the New England elite, a world of prep schools, mansions and servants seemingly untouched by the Great Depression. His father, Prescott Bush, the son of an Ohio steel magnate, made his fortune as an investment banker and later served 10 years as a senator from Connecticut.

After being a World War II hero, George Bush rose through the political ranks: from congressman (1966-70) to U.N. ambassador (1971), Republican Party chairman (1972) to envoy to China (1973-76), CIA director (1976) to two-term vice president (1981-89) under the hugely popular Ronald Reagan to ultimately become the 41st president of the USA in 1989. The 1991 Gulf War with the coalition victory over Iraq in Kuwait that too many Americans helped purge the ghosts of Vietnam stoked his popularity, which then plummeted in the throes of a weak economy. As President Jimmy Carter before him, he was a one-time president. He failed in his reelection bid against a little-known Democratic governor from Arkansas, Bill Clinton, in 1992. (Businessman H. Ross Perot took almost 19 percent of the vote as an independent candidate.)

Later, Sr. Bush would acknowledge that as a poor communicator he had trouble articulating “the vision thing,” and that he was haunted by his decision to break a stern, solemn vow he made to voters: “Read my lips. No new taxes.” Voters penalized him severely for breaking that promise. They considered out of touch with reality.

Bill Clinton’s popular campaign had reverberated around the slogan ‘It’s economy, stupid!’ Bush failed to rein in the deficit, which had tripled to $3 trillion under Reagan and galloped ahead by as much as $300 billion a year under Bush, who put his finger on it in his inauguration speech: “We have more will than wallet.”

Once out of office, the elder Bush was content to remain on the sidelines. His popularity rebounded with the growth of his reputation as a fundamentally decent and well-meaning leader who was a steadfast humanitarian. Elected officials and celebrities of both parties publicly expressed their fondness. He backed Clinton on the North American Free Trade Agreement (NAFTA), which had its genesis during his own presidency (now opposed by Trump). He visited the Middle East, where he was rewarded for his defense of Kuwait. He later teamed with Clinton to raise tens of millions of dollars for victims of a 2004 tsunami in the Indian Ocean and Hurricane Katrina, which swamped New Orleans and the Gulf Coast in 2005.

Like many powerful rulers, the 41st president, however, was a mass murderer whose ‘liberating’ forces killed nearly half a million Iraqis – military and civilians – when such could surely have been avoided. To his credit, however, after liberating Kuwait, he rejected suggestions that the U.S. carry the offensive to Baghdad, choosing to end the hostilities a mere 100 hours after the start of the ground war. But the decisive military defeat did not lead to the downfall of Saddam Hossein, as many in the administration had hoped.

“I miscalculated,” acknowledged Bush. His legacy was dogged for years by doubts about the decision not to remove Saddam Hussein. The Iraqi leader was eventually ousted in 2003, in the war led by Bush’s son that was followed by a long, bloody insurgency in a war that taxed American resources and patience, and still ongoing, fueling further wars in the entire region.

According to Jon Meacham, his biographer, the elder Mr. Bush believed that his son George W’s administration had been harmed by a “hard line” atmosphere that pushed an aggressive and ultimately self-destructive use of force around the world, and he placed the blame for that on Dick Cheney, his son’s vice president, and Donald H. Rumsfeld, his son’s secretary of defense.

George H. W. Bush underscored the theme of duty in accepting his party’s nomination for the presidency in 1988 in New Orleans. “I am a man who sees life in terms of missions — missions defined and missions completed,” he told Republican delegates in the Louisiana Superdome in 1988. He rode into office pledging to make the United States a “kinder, gentler” nation (in contrast to Trump’s pledge of making ‘America Great Again’) and calling on Americans to volunteer their time for good causes — an effort he said would create “a thousand points of light.”

Mr. Bush sought to safeguard the environment and signed the first improvements to the Clean Air Act in more than a decade. It was activism with a Republican cast, allowing polluters to buy others’ clean-air credits and giving industry flexibility on how to meet tougher goals on smog. He also signed the landmark Americans with Disabilities Act to ban workplace discrimination against people with disabilities and require improved access to public places and transportation.

Bush’s true interests lay elsewhere, outside the realm of domestic politics. He operated at times like a one-man State Department, on the phone at dawn with his peers — Mikhail Gorbachev of the Soviet Union, Francois Mitterrand of France, Germany’s Helmut Kohl.

His greatest legacy is that he ended the cold war in a peaceful way. Communism began to crumble on his watch, with the Berlin Wall coming down (1989), the Warsaw Pact disintegrating and the Soviet satellites falling out of orbit. He seized leadership of the NATO alliance with a bold and ultimately successful proposal for deep troop and tank cuts in Europe. Huge crowds cheered him on a triumphal tour through Poland and Hungary.

Bush’s invasion of Panama in December 1989 was a military precursor of the Gulf War: a quick operation with a resoundingly superior American force. In Panama, the troops seized dictator Manuel Noriega and brought him back to the United States in chains to stand trial on drug-trafficking charges.

He took presidential office with the humility that was his hallmark. “Some see leadership as high drama, and the sound of trumpets calling, and sometimes it is that,” he said at his inauguration. “But I see history as a book with many pages, and each day we fill a page with acts of hopefulness and meaning. The new breeze blows, a page turns, the story unfolds.”

He was an avid outdoorsman who took Theodore Roosevelt as a model. Bush approached old age with gusto, celebrating his 75th and 80th birthdays by skydiving over College Station, Texas, the home of his presidential library. He did it again on his 85th birthday in 2009, parachuting near his oceanfront home in Kennebunkport, Maine. He used his presidential library at Texas A&M University as a base for keeping active in civic life.

He became the patriarch of one of the nation’s most prominent political families. In addition to George W. became president, another son, Jeb, was elected Florida governor in 1998 and made an unsuccessful run against Trump for the GOP presidential nomination in 2016.

The 43rd president issued a statement Friday following his father’s death, saying the elder Bush “was a man of the highest character.” He may be partially factual given that the elder Bush was later accused of groping women.  Mr. Bush’s office said the gestures, he patted them on the rear, were meant in a good-natured matter, but said: “to anyone he has offended, President Bush, apologizes most sincerely.”

Obviously, like most famous people, George H. W. Bush’s life will be read and reviewed by historians. He had his ups and downs, successes and failures, but most Americans will remember him as an able, prudent, restrained and seasoned leader.

He was also a great statesman. Before he left the White House, he left a note for his successor Bill Clinton in the Oval Office on his Inauguration Day in 1993. The note is a great reminder of what a true statesman he was.

When I walked into this office just now I felt the same sense of wonder and respect that I felt four years ago. I know you will feel that, too.

I wish you great happiness here. I never felt the loneliness some Presidents have described.

There will be very tough times, made even more difficult by criticism you may not think is fair. I’m not a very good one to give advice; but just don’t let the critics discourage you or push you off course.

You will be our President when you read this note. I wish you well. I wish your family well.

Your success now is our country’s success. I am rooting hard for you.

James A. Baker III was the former secretary of state and Mr. Bush’s closest adviser for nearly 50 years. He said in an interview in 2013, “George H. W. Bush was the best one-term president the country has ever had, and one of the most underrated presidents of all time.” “I think history is going to treat him very well.”

Only time would either prove or disprove James Baker. One thing for sure though: America has lost an authentic statesman when they need such individuals more than ever before.