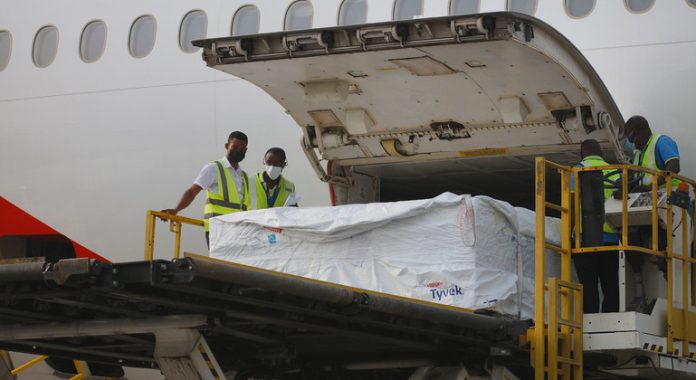 Confirming the news on Wednesday, the World Health Organization (WHO) said that further supplies of the AstraZeneca/Oxford jab will reach Côte d’Ivoire later this week.

These are the first coronavirus shots from the COVAX scheme to be distributed outside India, where the vaccine is being produced under licence.

Further supplies will be shipped to the other members as the global rollout gathers pace, when readiness criteria have been met and the doses produced.

Tedros Adhanom Ghebreyesus, the WHO Director General, welcomed the development, along with COVAX partners Gavi, the Vaccine Alliance and the Coalition for Epidemic Preparedness Innovations (CEPI).

But he insisted that there was still “a lot of work to do” to secure support for WHO’s goal of giving the vaccine to all health workers and older people in the first 100 days of the year.

“We will not end the pandemic anywhere unless we end it everywhere,” the WHO chief said in a joint statement.

“Today is a major first step towards realizing our shared vision of vaccine equity, but it’s just the beginning. We still have a lot of work to do with governments and manufacturers to ensure that vaccination of health workers and older people is underway in all countries within the first 100 days of this year.”

But the “increased spread” of COVID-19 variants had ushered in a “new and less predictable phase of the pandemic”, Dr Hatchett insisted. “It is crucial that the vaccines we have developed are shared globally, as a matter of the greatest urgency, to reduce the prevalence of disease, slow down viral mutation, and bring the pandemic to an end.”

In an appeal for greater support for the initiative, which Dr Seth Berkley, head of fellow COVAX partner GAVI insisted that the delivery of vaccines to Ghana was a proud moment, but it had to be repeated “to all participating economies” in coming weeks, “to ensure that those most at risk are protected, wherever they live”.

Governments and businesses needed to “recommit” to COVAX, the Gavi chief insisted “and help us defeat this virus as quickly as possible”.

In order for new coronavirus doses to be delivered to COVAX participants, the criteria which need to be fulfilled include confirmation of national regulatory authorisations for the vaccine in question, national vaccination plans and export and import licences.

The development comes as WHO reported a drop in COVID-19 deaths for the third consecutive week.

Some 66,000 deaths were reported last week, according to the UN agency’s latest update on the disease, which was issued on Wednesday.

WHO said deaths have fallen in all regions except the Western Pacific, which recorded a six per cent increase.

New infections also decreased by 11 per cent over the same period in four out of six regions.  However, South-East Asia and the Eastern Mediterranean reported small increases of two per cent and seven per cent respectively.

Globally, there have been nearly 111 million cases of COVID-19 since the start of the pandemic, and more than 2.4 million deaths.

The United States, Brazil, France, Russia and India continue to report the highest number of cases.