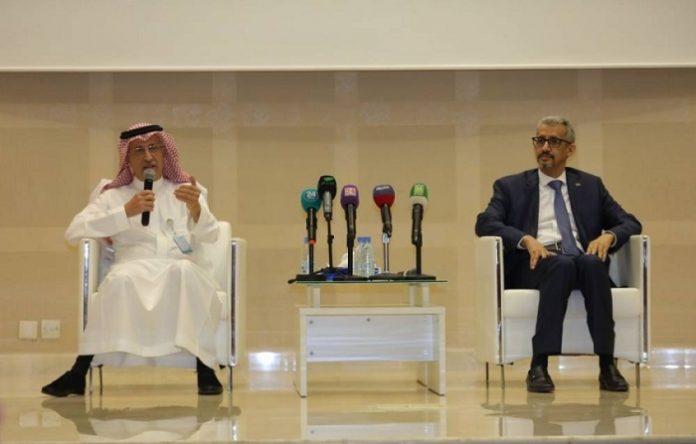 Riyadh (UNA-OIC) – Saudi Arabia’s capital Riyadh witnessed Wednesday the launch of the “Gifted Arabs” initiative at the level of the Arab world, for the creation of the future.

The event was launched in partnership between the King Abdulaziz and His Companions Foundation for Giftedness and Creativity (Mawhiba) and the Arab League Educational, Cultural and Scientific Organization (ALECSO).

This came during a press conference held at the Foundation headquarters in Riyadh, in the participation of Mawhiba Secretary-General Dr. Saud bin Saeed Al-Mathami, and ALECSO Director-General Dr. Mohamed Ould Amar, in the presence of Chairman of the ALECSO Executive Council Hani bin Moqbel.

Dr. Al-Mathami said the “Gifted Arabs” is an initiative instituted by Saudi Arabia for the Arab world, in the field of discovering and nurturing the gifted, to confirm the Kingdom’s keenness, under the leadership of Custodian of the Two Holy Mosques King Salman and Crown Prince Mohammed bin Salman, to institutionally activate the role of the Kingdom at ALECSO.

He commended the patronage of Saudi Minister of Culture Prince Badr bin Abdullah bin Farhan, who is also chairman of the Saudi National Committee for Education, Culture and Science, for signing the Arab Gifted Agreement.

The Mawhiba Secretary-General also praised the Saudi minister’s efforts in supporting initiatives and partnerships with national authorities in the fields of education, culture and science, as well as with regional and international organizations, in order to luster more of the younger gifted Arabs, which will contribute to achieving the 2030 Agenda for Sustainable Development Goals (SDGs) to raise competencies and energies in the Arab world.

Al-Mathami stated that Mawhiba — as a leading foundation with abundant experience in the field of discovering, nurturing and empowering gifted students, and has the most comprehensive program in caring for the gifted in the world — has worked on developing a scientific scale for discovering gifted Arabs, in cooperation with the Saudi Education and Training Evaluation Commission (ETEC), including taking into account the various cultural differences.

He added that Mawhiba also focuses on investing in the gifted and creative young Arab energies, which leads to the care and assimilation of the gifted and creative Arabs, in addition to providing them with an appropriate environment, benefiting from their qualitative capabilities, and enabling them to lead change and create the future in the Arab world.

The Mawhiba chief explained that an invitation was extended to all ALECSO Member States to nominate their students according to the specific mechanism, pointing out that 13 Arab countries have participated so far, namely, Saudi Arabia, the United Arab Emirates, Bahrain, Qatar, Oman, Jordan, Iraq, Tunisia, Libya, Palestine, Yemen, Sudan, and Mauritania.

For his part, ALECSO Director-General Mohamed Ould Amar thanked the Saudi leadership, and Minister of Culture Prince Badr bin Abdullah bin Farhan for his interest, support and sponsorship of this initiative.

“The discovery of gifted Arabs and development of their capabilities reflects the interest in the scientific, social and cultural challenges posed by the Fourth Industrial Revolution, as culture is an essential component of drawing the Arab identity, and because the issue of promoting Arab culture is of great social and economic importance, which is a necessary pillar to ensure a better future for the younger Arab generations in light of global trends, to achieve sustainable development, according to a perspective that is consistent with the cultural heritage of the Arab peoples and does not conflict with their beliefs.” said Ould Amar.

He added that ALECSO is keen to integrate with Mawhiba, to contribute to the dissemination of giftedness and creativity in the Arab world by taking advantage of its pioneering expertise, stressing the Organization’s appreciation for the distinguished position that Mawhiba has reached in discovering, nurturing and empowering gifted people at the global level.

The ALECSO Director-General pointing out that the “Gifted Arabs initiative represents an enhancement of our qualitative partnership, and is a step to raise awareness of the importance of giftedness and the role of the gifted in building knowledge, supporting sustainable development in the Arab world, and encouraging giftedness.”

It is noteworthy that Mawhiba and ALECSO have a long history of partnership and cooperation, which began with the signing of a memorandum of understanding in 2008 to prepare the Arab Strategy for Giftedness and Creativity in Public Education, in implementation of the recommendations of the 6th Conference of Arab Ministers of Education and Scientific Research, hosted by Saudi Arabia in Riyadh, in 2008.