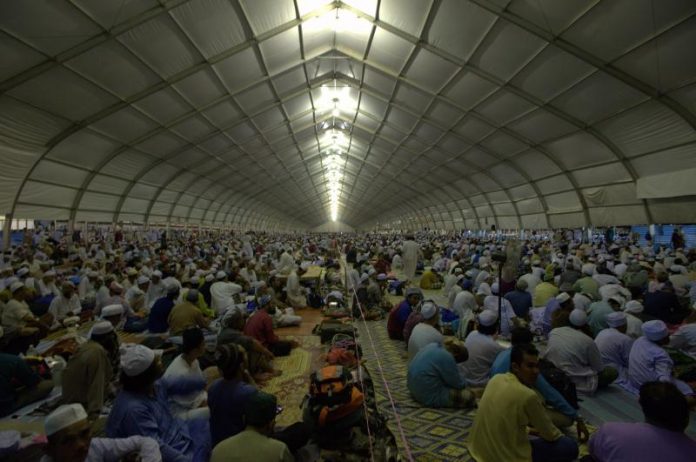 The Tablighi Jamaat (Society for spreading faith), a non-political group which concentrates on individual piety, has split in recent years into three major groups over the leadership issue.

Since its inception in 1929, the Tablighi Jamaat (TJ) had its global headquarters in Basti Nizamuddin in New Delhi, India.

Hence the TJ has split into three main factions:

2. India, which was the traditional headquarters of the TJ. This faction is now called Nizamuddin group who recognize the leadership of Maulana Saad Khandalvi.

3. Pakistan, where a major TJ Ijtema is held in Raiwind, Lahore. This faction is the known as Raiwind group.

Like many countries, the USA also has very active Tablighi Jamaat. However, it is not known where is the Markaz or headquarters of the TJ America. Chicago, Detroit, Los Angeles, Philadelphia, Atlanta, New York, and Washington, D.C., are the major centers of the Jamaat’s activities in the United States. According to a Voice Of America report of January 2016, U.S. officials estimate that the Tablighi Jamaat has some 50,000 followers in mosques in the United States.

Incidentally, the Raiwind leadership had no place to go, hence they occupied the Islamic Society of East Bay mosque which is already facing a serious dispute between the members who want to run the mosque in secrecy (which they were doing for the last 20 years or so) and the ISEB founding and senior members who want to run the mosque transparently and complete the third phase of the mosque.

On Tuesday, October 9, 2018, a Tablighi Jamaat, led by Mufti Shokat Ali from India visited the Islamic Center of Fremont, CA, known as Irvington Mosque. I met with the leader or Amir of the Indian TJ and other members of the group to explain the dispute over leadership at Richmond mosque. They were apparently not aware of the leadership dispute here. Their reaction was that they only convey a message of fraternity and peace.

Tellingly, Mufti Shokat Ali addressing the people after the Isha (night) prayer pointed out that mosques are the cleanest places on earth but unfortunately they are also centers of in-fighting. Perhaps Mufti Shokat Ali was alluding to the leadership in-fighting of Tablighi Jamaat.

It may be recalled that on June 19, 2016, followers of the two senior leaders of Tablighi Jamaat, Maulana Saad Kandhalwi and Maulana Zuhair ul Hassan, clashed physically over the issue of assuming topmost leadership at the world headquarters of Tablighi Jamaat at Bangle Wali Masjid located in Basti Hazrat Nizamuddin in Delhi.

This clash happened during the holy month of Ramadan. According to TwoCircles.net report, after Iftar and Maghrib prayer the groups belonging to Maulana Saad Kandhalwi and Maulana Zuhair ul Hassan were discussing the issue of Amarat (leadership) which turned into brawl leading to violent clashes inside the mosque. The situation became so aggressive that police was called from eight police stations to control it. As many as 11 injured were taken to hospital for treatment. The situation became so sensitive that the police had to keep a close eye on the gathering whole night.

The issue of leadership of the world-wide Tablighi movement is not new. Since the passing away of Maulana Inaam ul Hassan popularly known as Hazrat ji, a shura was appointed instead of one Amir. Shura consisted of Amir of Tablighi Jamaat Pakistan Haji Abdul Wahhab, Maulana Zubair ul Hasan who is the son of Inamul Hasan, and Maulana Saad Kandhalwi son of Maulana Yusuf Kandhalwi, the second Amir of the group. Since the passing away of Maulana Zubair ul Hasan in 2014, Maulana Saad has become the Amir.

Son of Maulana Zubair ul Hasan, Maulana Zuhairul Hasan, has also laid a claim to the leadership, his followers have asked Maulana Saad to reconstitute the Shura which was rejected by Saad.

The split in the central leadership has a devastating effect on the TJ across the globe. For example:

Tablighi Jamaat has split into two groups in Britain with one faction following Raiwind Markaz while the other is following Maulana Saad of Nizam-ud-Din in India. The Tablighi Jamaat started its mission in Britain around 50 years ago and its membership grew steadily.

The differences grew so much that several incidents of brawl occurred and members and elders assaulted each other in London Markaz and Abbey Mills Mosque. The News quoted Tablighi sources as saying that that the police were called about 13 times and four people were arrested on different occasions.

In Britain, Tablighi Jamaat has one of the strongest presence outside Bangladesh, India and Pakistan. Tablighi Jamaat was so well-organized at one stage that it stunned media in Britain when it told local council and courts around 12 years ago that a mega-mosque at the current place of disputed Masjid Ilyas land would be built – and assured that it had funds of hundreds of millions of Pounds for a purpose-built Tablighi mosque that could host thousands of people at one time, thereby becoming the largest mosque anywhere in the West.

While the case of dispute of land possession of Ilyas Masjid was brought before the court by the warring groups, the London High Court earlier this year issued a devastating verdict against the Tablighi center for being in violation of the laws.

The London High Court has ordered that the local Newham Council was right to deny planning permission to London Markaz and ordered that it should be demolished because the masjid was built on the land allocated for some other purpose.

The two factions now don’t go to each other’s mosques and security personals are deputed at the gate of Ilyas Masjid to identify the members who come to the mosque to attend sermons. The management of Masjid Ilyas has restricted entry of a few individuals.

The plan to build the mega-mosque now stands ruined not only because of the London High Court order but also because of the fact that the Tablighi elders are involved in a bitter do-or-die fight.

Not surprisingly, in November 2017, there was a violent clash between the two groups over the TJ leadership dispute in Kakrail Mosque in Dhaka, Bangladesh. Kakrail Mosque is the Markaz of Tablighi Jamaat of Bangladesh which hosts the largest Tablighi Ijtema in January every year. There were massive demonstrations in Dhaka when Maulana Saad Kandhalwi arrived to attend this January’s Ijtima. Maulana was not allowed to attend the Ijtema. He was sent back to Delhi by the Bangladesh government because of law and order situation.

Around two million people attend the Bangladesh Ijtima which is perhaps the second largest gathering of Muslims after Hajj. The Tablighi Jamaat is estimated to be active in at least 165 nations throughout the world with millions of members.

UN calls for resumption of Mediterranean rescues, after 43 die in...