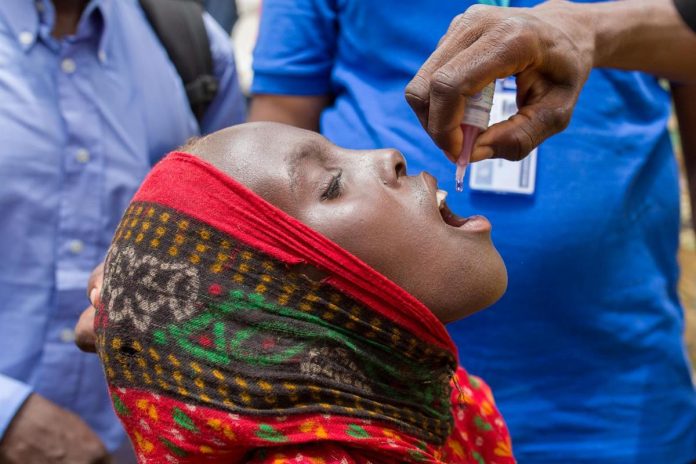 Today, the Africa Regional Certification Commission certified the WHO African Region as wild polio-free after four years without a case. With this historic milestone, five of the six WHO regions – representing over 90% of the world’s population
– are now free of the wild poliovirus, moving the world closer to achieving global polio eradication.

The Global Polio Eradication Initiative (GPEI) congratulates the national governments of the 47 countries in the WHO African Region for today’s achievement.

“Ending wild polio virus in Africa is one of the greatest public health achievements of our time and provides powerful inspiration for all of us to finish the job of eradicating polio globally,” said WHO Director-General Dr Tedros Adhanom
Ghebreyesus. “I thank and congratulate the governments, health workers, community volunteers, traditional and religious leaders and parents across the region who have worked together to kick wild polio out of Africa.”

Strong leadership and innovation were instrumental in stopping the wild poliovirus in the region. Countries successfully coordinated their efforts to overcome major challenges to immunizing children, such as high levels of population movement, conflict
and insecurity restricting access to health services, and the virus’s ability to spread quickly and travel across borders.

In addition, the continued generosity and shared commitment of donors – including governments, the private sector, multilateral institutions and philanthropic organizations – to achieving a polio-free world helped build the infrastructure
that enabled the African region to reach more children than ever before with polio vaccines and defeat wild polio.

“During a challenging year for global health, the certification of the African region as wild poliovirus-free is a sign of hope and progress that shows what can be accomplished through collaboration and perseverance,” said Rotary International
President Holger Knaack. “Since 1996, when Nelson Mandela joined with Rotary, the Global Polio Eradication Initiative, and governments of the African region we’ve achieved something remarkable. Today’s milestone tells us that polio
eradication is possible, as long as the world remains committed to finishing the job. Let us work together to harness our collective energies to overcome the remaining challenges and fulfil our promise of a polio-free world.”

The resources and expertise used to eliminate wild polio have significantly contributed to Africa’s public health and outbreak response systems. The polio programme provides far-reaching health benefits to local communities, from supporting the
African region’s response to COVID-19 to bolstering routine immunization against other vaccine-preventable diseases.

While this is a remarkable milestone, we must not become complacent. Continued commitment to strengthening immunization and health systems in the African region is essential to protect progress against wild polio and to tackle the spread of type 2 circulating
vaccine-derived poliovirus (cVDPV2), which is present in 16 countries in the region. Pockets of low immunity mean such strains continue to pose a threat and the risk is magnified by interruptions in vaccination due to COVID-19, which have left communities
more vulnerable to cVDPV2 outbreaks.

The GPEI calls on countries and donors to remain vigilant against all forms of polio. Until every strain is eradicated worldwide, the incredible progress made against polio globally will be at risk.

The WHO African Region’s success against wild polio has shown the world that progress against some of the biggest global health challenges is possible. The GPEI is grateful for every person, partner, donor and country who helped bring about this
incredible achievement.

The Global Polio Eradication Initiative is a public-private partnership led by national governments with six core partners – the World Health Organization (WHO), Rotary International, the US Centers for Disease Control and Prevention (CDC), UNICEF,
the Bill & Melinda Gates Foundation and Gavi, the Vaccine Alliance.

For information and multimedia content on the WHO African Region’s efforts to eradicate wild polio, please visit africakicksoutwildpolio.com. For more information on the global effort to end
polio, visit polioeradication.org.

G20 Leaders’ Summit to be held virtually on November 21