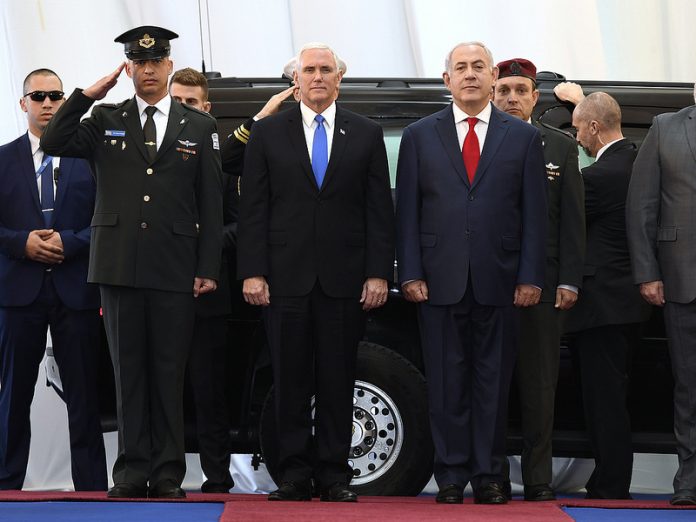 I generally don’t hate people. With the sole exception of people who have betrayed the trust I put in them and tried to stick a knife in my back. Not more than three or four in all my life. I am not going to name them.

I have not met Netanyahu on a private basis more than two or three times.

Once, he introduced me to his second wife in the Knesset corridor. She seemed to me a nice young woman.

The second time we met at a photographic exhibition, in which there was a photo of me wearing a pilot’s helmet. (Don’t know how and why).

“You look like Errol Flynn,” he told me. I had never seen an Errol Flynn movie, but took it as a compliment.

We had, of course, many arguments in the Knesset, but that doesn’t count.

Therefore, if I want to remove Netanyahu from the government, and as soon as possible, it is not because of any personal feelings. I just believe that he is a disaster for Israel.

The endless cases of bribery that have surfaced – and continue to surface, like submarines – necessitate his removal at once. And we have not yet even reached the affair of the German-built submarines, which promises many new revelations. As a former editor of a news-magazine that specialized in investigations of corruption affairs, I can smell it.

A lot of people would enjoy seeing “Bibi” in prison. I would not. If it were up to me, the President of State and the Attorney General would offer him a Nixon-style deal: resign immediately and be pardoned five minutes later. You and your wife. No case, no trials. Go home and enjoy life.

There is no financial problem. Netanyahu is a rich man, with a generous pension as a former Prime Minister, with several luxury apartments, quite apart from the huge bribes he seems to have pocketed along the way.

Also, every publisher in the world would gladly pay a big advance for his memoirs.

So there is no reason to pity him.

TROUBLE IS, who will take his place?

The empty Knesset seat will be occupied by an anonymous female lawyer, who was put on the party’s candidate list on the spot reserved for “new female candidate”. But that is not really important.

The important question is: who will become Prime Minister?

Netanyahu’s resignation would not automatically mean the dissolution of the present Knesset. If another Knesset member can put together a majority in the present Knesset, he (or she) will be the next Prime Minister. Only a Likud member stands a chance.

But is there any likely candidate? I doubt it. Like many strong but insecure leaders, Netanyahu has not groomed a successor. On the contrary, he has driven away all possible candidates.

The present Likud leadership and the entire gallery of the present government ministers of the Likud and its allies consist of nonentities. Not one of them I could really imagine as the man(or woman) responsible for the future of Israel. God forbid (whether He exists or not).

IF NO ONE succeeds in setting up a new government in the present Knesset, a new Knesset must be elected.

Can new elections produce a different majority? Possible, but not likely.

In a normal country, after the almost incredible series of corruption affairs, the opposition would assume power, and one of its leaders would become Prime Minister. Simple.

But Israel is not a normal country. There is a profound split between left and Right, with nothing in the middle. For large blocks of voters to move from Right to Left is almost impossible. Neither is there agreement on the question of what is the proper behavior for a Prime Minister.

A professor once told me: “A British Prime Minister who fills all senior government positions with relatives would be considered corrupt. An Egyptian leader who does not do so would be considered egoistic. What, he has so much luck and does not share it with his family?”

It seems that the more evidence about Netanyahu’s corruption turns up, the more fiercely his party members support him. It’s all a smear campaign of the evil Left! It’s all fake news! The police is in cahoots with

the treasonous Ashkenazi Labor party (in spite of the fact that the police chief, who was personally picked by Netanyahu, is a Yemenite kippah-wearing former secret service officer).

SO THE next Knesset will probably look more or less like the present one. If so, what will happen?

Of the 120 members of the present Knesset, 30 belong to the Likud, 10 to Kulanu (“All of Us”), a splinter party formed by a former Likud member, 8 to the religious Jewish Home party, 7 to the Oriental religious party, 6 to Avigdor Lieberman’s extreme rightist “Israel our Home” party, 6 to the Orthodox party. This is the present government coalition, 67 altogether.

The opposition consists of 24 Labor members (called “Zionist Camp”), 11 in Ya’ir Lapid’s “There is a Future” party, 5 Meretz members and the 13 United Arab List members, whom almost nobody counts. Altogether 53.

Assuming that the results of the next elections will be more or less the same, as polls predict, these numbers draw the eye almost automatically to the 10 members of Kulanu. Their unquestioned leader is Moshe Kahlon, at present the always-smiling Minister of Finance, who is considered liberal and moderate. Can he switch camps?

Actually, everybody assumes that in the next elections the Labor party will go down. After changing leaders like socks, it chose an Oriental boss, Avi Gabbay, in order to shake off the curse of being an “Ashkenazi” party. It did not work. Under Gabbay, the party continues to lose in the polls. (The Likud , with its overwhelming Oriental membership, always chose Ashkenazi leaders like Netanyahu.)

If Labor goes down, Lapid’s party goes up. It may well become the largest party. This would turn Lapid into the likely candidate for Prime Minister, provided he succeeds in drawing Kahlon to his side.

But who is Lapid? He is the perfect politician. He looks good on TV. He speaks well and says nothing. This ideological void is a great advantage: he is everything to everybody.

His father, whom I knew well, was a Holocaust survivor, who vividly remembered his childhood in the Budapest ghetto.He was a liberal politician, but with an extreme nationalist outlook. The son may turn out the same.

So what would Prime Minister Lapid do about peace? Nobody knows for sure. He would find it mentally difficult to include the Arabs in his coalition – which would deprive him of a majority. However, the Arabs may support him “from the outside”, as happened to Yitzhak Rabin and made the Oslo agreement possible. But some warn that under Lapid “we would pine for Netanyahu”.

Many dream of a completely new party, a union of all liberal, progressive, peace-loving elements, with a new, young leadership, which would completely change the landscape. But there is no sign of it yet.

On the contrary, many young people turn away from politics in disgust and engage in direct action, fighting the settlers and trying to protect the Arab population. Wonderful people, important actions – but completely without influence on politics. And alas politics decides our future.

I Love Israel. My comrades and I created it and paid for it with our blood (literally). My heart aches when I see what is happening.

But I remain an optimist. I continue to believe that somehow, somewhere, salvation will come. New political forces will emerge and come to the fore.

As our Muslim friends would say: Inshallah (God willing).

Some Good, Some Bad in the Democrats’ Platform on Israel/Palestine